Q&A: All you need to know about Berlusconi’s tax fraud trial and its potential implications for the Italian government 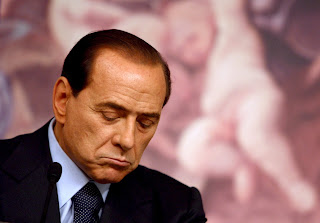 A very interesting development, although the Supreme Court would obviously be free to uphold the entire five-year ban if it wanted to. As we noted in our blog post from this morning, we will have to wait until tomorrow (or maybe even Thursday) before the final verdict is read out.

The final hearing of Silvio Berlusconi’s tax fraud case (the so-called ‘Mediaset trial’) has started in Italy’s Supreme Court this morning. However, according to the Italian media, the verdict is likely to be read out tomorrow – or even on Thursday morning.

We thought a short Q&A would help highlight the potential significance of the ruling:

1. Which trial are we talking about? And where are we at?

We are talking about the so-called Mediaset trial, where Berlusconi faces tax fraud charges. The former Italian Prime Minister was found guilty by both the first-instance court and the Court of Appeal. He was sentenced to four years in prison and a five-year ban from holding public office. Therefore, he appealed to the Supreme Court. The Supreme Court is Italy’s highest court, meaning that Berlusconi would have no more appeals left if the conviction were upheld.

2. But he can still be acquitted, right?

Of course. The court can decide to clear Berlusconi completely. Or it can rule that the case must be re-examined by the Court of Appeal. This would increase the likelihood that the tax fraud charges against Berlusconi time out – since Italy’s statute of limitations would kick in at some point during the late summer of 2014.

3. What happens if the Supreme Court upholds the conviction? Would the sentence be immediately effective?

No. Berlusconi is a Senator, so he is protected by parliamentary immunity. Therefore, a vote in the Italian Senate’s Immunities Committee and a vote in the Senate plenary (most likely through a secret ballot) would be needed before the public office ban can be enforced. Berlusconi’s party could be easily outvoted in both cases, but the outcome would be far from guaranteed in reality – not least because Berlusconi’s party could threaten to withdraw its support to Prime Minister Enrico Letta’s coalition government if the votes go ‘the wrong way’ from its point of view.

4. Would Berlusconi be likely to spend any time behind bars?

No. If the four-year prison sentence were upheld, three years would be remitted anyway due to an amnesty law passed by Romano Prodi’s centre-left government in 2006. This would leave Berlusconi (a 77-year-old man) with only one year to serve – making either house arrest or community service the most likely options.

5. Okay. Now, let’s assume the Supreme Court upholds the tax fraud conviction and the Italian Senate rubber-stamps the public office ban. Berlusconi has to resign and is banned from holding public office for the next five years. What happens to the Italian government?

The short answer is, “Nobody knows”. Several senior members of Berlusconi’s party have evoked drastic retaliation (withdrawal from government, resignation en masse of Berlusconi’s MPs and Senators, snap elections, and so forth). The truth is Il Cavaliere would make the final decision – and his party would then almost certainly follow the leader. Sure enough, there would be the potential to trigger a political crisis in Italy.

6. Could this be the end of the line for Berlusconi’s political career?

Not entirely. Even if served with a five-year public office ban, Berlusconi could continue to lead his party – although he would not be allowed to stand for election.

As usual, we recommend you follow us on Twitter @OpenEurope and @LondonerVince for all the updates from Rome.