Is Cyprus eyeing up an exit from its capital controls? 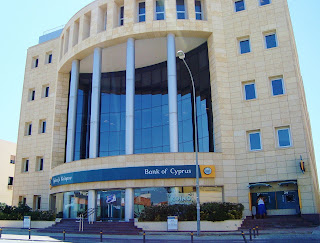 As expected the Cypriot government has finally reached a deal with the EU/IMF/ECB Troika over the final stage of the restructuring of the Bank of Cyprus (BoC).

As we noted in today’s press summary this was not an easy decision to reach, and has dragged on since Spring, for a couple of reasons:

In the end the two sides settled on a 47.5% haircut for uninsured deposits over €100,000 – although these funds will not be completely lost but converted into shares of the bank. This is above the original target of 37.5% but below the potential limit of 60% (for the most part).

The most interesting part of this whole deal might be the following though:

“Following the recapitalisation, 12% of deposits that were previously blocked will be released (5% in total).

The balance will be split evenly into three separate time deposits of six, nine and twelve months, respectively. BoC will have the option to renew the time deposits once for the same time duration. These deposits will receive a rate of interest which will be higher than the corresponding market rates offered by the BoC.”

Of the remaining frozen deposits 12% will be released then, while the rest will first be converted to time deposits, meaning people may not have access to their money for between 6 and 24 months. There are likely a couple of motivating factors here:

These funds are only likely to be worth around €6bn, so not a huge amount in a country with a deposit base still around €50bn and far from enough to settle the question of capital flight once the controls are removed.

But it suggests that both Cyprus and the Troika are planning for an exit from capital controls and looking for ways to stem the potential outflow. The quicker this can be done in a managed way the better for the Cypriot economy. As we have noted before, as long as the capital controls apply the hope of a recovery is slim to none in Cyprus and the euro continues to look incredibly fragmented.

(Note: the blog has been updated with new calculations. Previously it suggested the total coverted to term deposits would be €2bn, however, it is likely to be closer to €6bn).