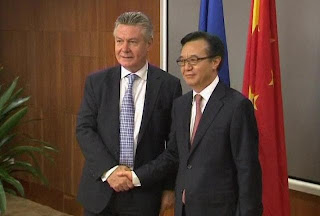 China and the EU have finally reached a deal to settle their trade dispute over solar panels, which has lasted for almost an entire year and has escalated significantly over the past few months.

In the end it seems that China’s divide and conquer approach may have won out. The key details of the deal are as follows:

Given the original size of the proposed tariffs (50%+) it does seem that the EU’s Trade Commissioner Karel De Gucht has softened his stance substantially (although this has been happening for some time). This is likely due to the erosion of support for the case in some of the key member states – first Germany (which was never particularly enthused by the idea) and then the Mediterranean states (once China launched its investigation into European wine exports).

China’s agreement to drop its (largely) retaliatory disputes provide little cover for the aforementioned change in position. It seems the most important factor for EU officials was the cap on the capacity which can be sourced from China. This could prove to be important, but it still allows China to maintain control over a large majority of the market. It also suggests an implicit assumption that European producers can control the rest of the market (far from guaranteed if other emerging market producers see an opportunity to fill the gap created by the cap) and that the market will continue to grow, which European producers will be able to take advantage of – again far from guaranteed with the eurozone crisis and a struggling renewables sector in Europe.

This may though not be the last word in this dispute, after EU ProSun said it will challenge the deal at the European Court of Justice (ECJ). This could take some time to run its course, but as we noted when the dispute started, ostensibly, Chinese solar panel producers do receive huge government subsidies. By the letter of the law then, its possible the ECJ could side with the European producers.

Despite these issues, it’s clear that neither side could really afford to continue with this dispute. The more interesting question now is where this leaves the remaining 17 EU trade disputes which involve China. Has the balance of power shifted? Has De Gucht’s position been undermined by intergovernmental disputes? Ultimately, this may be determined by progress in a new investigation into Chinese dumping in the telecoms market. Watch this space.