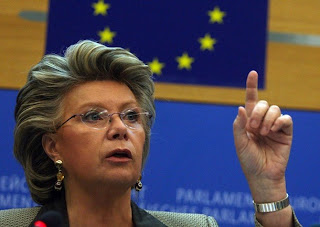 EU Justice Commissioner Viviane Reding has been mentioned as the potential nominee of the European People’s Party for the post of Commission President when Jose Manuel Barroso steps down next year (of course, gaining the approval of EU leaders is another matter).

One national capital that won’t be queueing up to endorse her is Budapest, following Reding’s escalating row with the Hungarian government over the country’s changes to its judicial system, which it has been claimed allow for too much political interference.

A bitter sub-plot in this argument has been the fate of Francis Tobin – an Irish national found responsible for a fatal road accident in Hungary in 2000 – whose extradition the Irish Courts have refused to sanction despite the issuing of a European Arrest Warrant. Reding seemingly backed the Irish position, claiming she was “not surprised” by the decision.

The latest chapter in this row has been sparked by comments Reding made during a visit to Bulgaria yesterday. We haven’t been able to find the original source, but it appears she suggested the Hungarian Supreme Court had been dissolved. The Hungarian government’s reaction did not pull any punches:

“These actions and lies of Viviane Reding cause great harm to the public image and reputation of the European Commission. Viviane Reding is either extremely ignorant, or she is lying out of political interests.”

“We call on her to make the data on which she has based her attack public, or failing that, to make an immediate apology.”