The Spanish National Statistics Institute (INE) has this morning published its latest unemployment data. The headline figures look encouraging. In the second quarter of 2013, the number of unemployed people went down by 225,200 – and is now slightly below six million. The total unemployment rate now stands at 26.3%, while youth unemployment rate is 56.1%.

However, a few points are worth keeping in mind when assessing the importance of these figures: 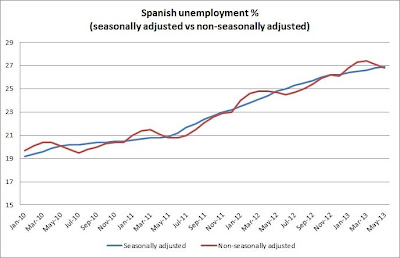 Unsurprisingly, the Spanish government had predicted “good” data – and will probably hail the new figures as a success of its policies. But once the summer is over, as happened last year, the figures may ultimately tell a rather different story.