The latest Cypriot deposit statistics seem to be out and there are some strange goings on.

We say seem to be, since there has been no press release but the July data release (which corresponds to June data) is up on the website in the usual place.

As the graphs below show, the outflow has continued, but there are some questions as to the extent of the outflow. 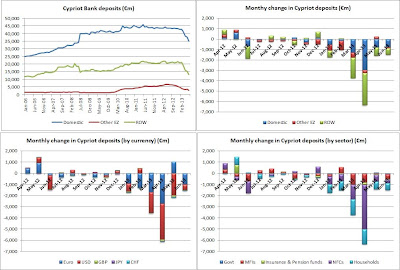 “July 2013: The data for loans and deposits for June 2013 reflect the provisions of the “Sale of Certain Operations of Cyprus Popular Bank Public Co Ltd Decree of 2013”. As from June 2013 Cyprus Popular Bank Public Co Ltd is not considered a Monetary Financial Institution for statistical purposes and therefore, its remaining balances (which were not transferred to Bank of Cyprus Public Company Ltd) are excluded from the outstanding amounts. However, according to the statistical guidelines of the European Central Bank this should not be considered a financial transaction and therefore an adjustment to remove its impact is included under “reclassifications adjustments” with a negative sign.”

As we have said before the real test will come when the capital controls are finally removed, although that does not seem to be on the horizon in the near future.