Turning a corner in the eurozone? Not quite yet…

There has been a lot of chatter this morning about the eurozone recession coming to an end following the release of the latest Markit Purchasing Managers’ Index (PMI) – a set of indicators used to measure the economic health of the manufacturing and service sectors. The index reached the highest level for 18 months and pushed past the point where it was continuing to decrease (see the relevant graphs below).

These results are clearly positive, but it seems that some commentators have been getting a bit ahead of themselves in declaring the recession and troubles over. Here are a few points to keep in mind: 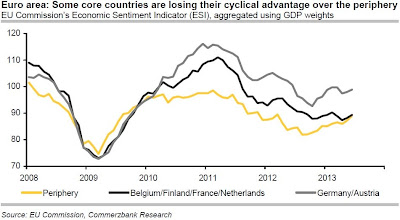 All that said, it is easy to pick holes in any single piece of data. The positive turnaround is good for the eurozone, but it is only one indicator and time will tell whether it can amount to a sustained improvement. Given the many obstacles which the eurozone has failed to address this still seems a very uncertain prospect to say the least.