Debt problems in Europe extend beyond the headline figures

High government debt is obviously a well-covered issue and a well-known problem in the eurozone. However, the debt problems extend well beyond this simple figure – we’ve touched on this previously, when looking at the level of financial sector debt and the need for a eurozone banking union. Another potentially interesting aspect of the debt problems relates to what is known as ‘implicit debt’. This is an estimate of the future debt which states will accrue including contingent liabilities such as pension payments and welfare payments (many of which are, at this point, unfunded).

In that vein, we thought it would be worth looking back at an interesting study produced by German think tank Stiftung Marktwirtschaft in coordination with academics at the University of Freiburg at the end of 2012. They’ve had a go at calculating the level of ‘implicit debt’ in the EU and what it means for debt sustainability. The results are laid out in the table below.

(‘Implicit debt’ is calculated using data on future GDP growth as well as on the long-run change in age-dependent expenditure, using the European Commission’s reports on ageing, all done assuming no policy changes and put into ‘present value’ terms). 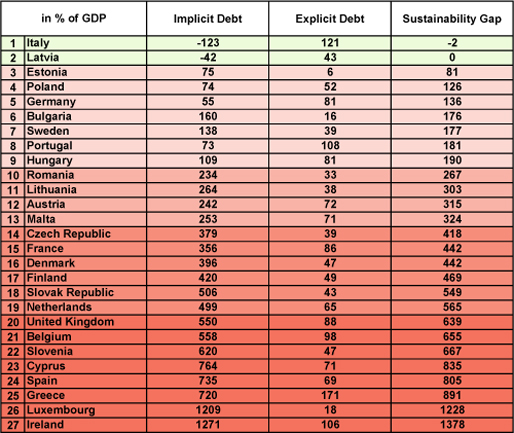 As with any such calculations, there are numerous assumptions and we must be wary of drawing grand conclusions, but the results provide some interesting points nonetheless. At the bottom of the debt sustainability ladder, we see the usual suspects such as Greece, Cyprus, Spain and Ireland (raising some questions about how effectively it is really recovering from its crisis). Slovenia, a country which we warned may be in line for a bailout, also finds itself in trouble by this metric. Surprisingly, Luxembourg fares very badly; the authors suggest this is down to its “generous” pension system which has not been overhauled to deal with future demographic developments.

It may also surprise many that Italy ends up top of the table. The authors suggest that this is due to the fact that the country “expects only a small rise in age-dependent expenditures as a proportion of GDP.” Italy admittedly made quite an effort already in reforming its pension system (in the 1990s and more recently under Mario Monti’s technocratic government) but this outcome does seem fairly optimistic, not least because it is reliant on Italy maintaining a long term growth level of close to 2% per year.

All that said, another study, by Société Générale, on the topic of “unfunded liabilities” relating to pension and welfare costs, places Italy’s at 364% debt of GDP suggesting it is better off than France (549%) or Germany (418%). Similarly, by the SocGen method, Spain would only have a burden of 244% to GDP, showing that a lot depends on the precise calculation and what is included. Perhaps a bit worryingly, the UK is doing worse than most eurozone countries in both calculations.

According to Johan Van Overtveldt, the editor-in-chief of Belgian magazine Trends who flagged up these results, “These figures are taken very seriously by the ECB”. With regards to Italy, he warns that “an increased interest rate or a continuing recession (or a combination of the two) can quickly and drastically overturn this positive image”.

In any case, these figures provide some added depth to the on-going debt issues in Europe and debatedly provide a slightly more complete picture than the simple headline debt to GDP figures. As we have noted before, though, this is simply one aspect of the varied and complex eurozone crisis which extends beyond just government debt to the banking sector and international competitiveness (to name but a few areas).