Beyond appearances, the recent political crisis has changed things in Portugal 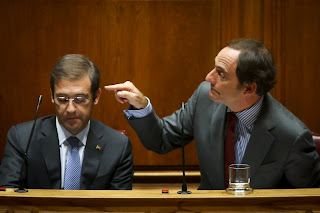 Political stability seems to have returned to Portugal – at least for now. The country’s ruling coalition and the opposition Socialist Party have failed to agree on the ‘national salvation pact’ demanded by President Aníbal Cavaco Silva to help the country successfully complete its EU/IMF bailout programme.

Nonetheless, Cavaco Silva said in a speech yesterday that the continuation of the existing centre-right coalition was “the best [alternative] solution” – thus ruling out snap elections. The Portuguese President also stressed that the government would request a vote of confidence in parliament on its future economic and social policy plans.

So are we back to square one in Portugal? Not entirely.

First of all, there will soon be a cabinet reshuffle – as agreed by the two ruling parties before President Cavaco Silva stepped in. In particular, Paulo Portas – the leader of junior coalition member, the People’s Party (CDS-PP) – should become Deputy Prime Minister and be in charge of dealing with the EU/IMF/ECB Troika from now on.

This could be an important change. Let’s not forget Portas tendered his resignation from the government because he disagreed with Prime Minister Pedro Passos Coelho over the appointment of Maria Luís Albuquerque as new Finance Minister. On that occasion, Portas made clear that he was hoping for a change in the country’s economic policy approach (in substance, less austerity).

This leads to a more general point, which we already made in the past (see here and here). Political consensus around EU-mandated austerity is shrinking in Portugal, and although the turmoil seems to have passed for now, tensions within the ruling coalition will remain – with Prime Minister Passos Coelho’s Social Democratic Party (PSD) clearly more in favour of sticking to the current economic policy course than its junior coalition partner.

Furthermore, as Prime Minister Passos Coelho himself admitted this morning, the recent political crisis has “undermined” confidence in Portugal’s determination to push ahead with the implementation of its bailout programme – something which could make it more difficult to obtain concessions from the European Commission and its eurozone partners in future.

As we noted in our flash analysis on this issue, these tensions have come at an inopportune moment for the country given that it still needs to enforce significant austerity to meet its targets and that its economic reforms to improve competitiveness now look off track. As political consensus wanes and protests increase, these tasks will become ever more challenging.

Needless to say, Portugal’s return to the markets – currently scheduled for June 2014 – is already looking quite complicated. Further delays or disagreements within the ruling coalition could make things even worse.