Italy: A new (and unexpected) ally on EU reform for David Cameron? 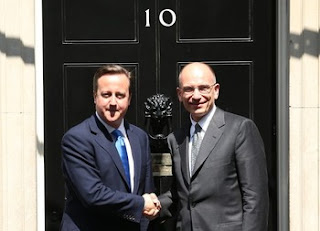 Italian Prime Minister Enrico Letta has probably made a lot more friends than he expected on his first official visit to the UK. This is largely due to a couple of quite sensible remarks he has made about the future of Europe and Britain’s role in it.

“It can be possible and it could be useful for us too…We need a more flexible Europe…We can have a new [EU] treaty negotiation for the UK to have a different link, but remaining on board, and for Italy or other countries in the euro to have a more integrated eurozone.”

He was even more specific during the joint press conference with David Cameron earlier today,

This certainly challenges the assumption that there’s no appetite for major treaty changes across Europe.

Meanwhile, in a piece for the Guardian‘s Comment is Free, Mr Letta also argued,

“Greater integration in the eurozone should not challenge the integrity of the single market or leave countries outside the eurozone less comfortable with their membership of the [European] Union…We need to reshape the Union, so that it can accommodate the interests of countries which want to move forward towards greater political and economic integration, and countries which prefer a co-operation around the single market.”

Furthermore, during the joint presser, Mr Letta repeated several times that the single market is “the main pillar” of the EU because, unlike the single currency, it is shared by all 28 member states.

This is music to David Cameron’s ears. Italy is traditionally one of the most pro-integration EU member states, and while Mr Letta believes in the ‘United States of Europe’, the fact that he also acknowledges the need to make the EU “more flexible” is potentially significant. It means that more integration in the eurozone, if that is what happens, is not incompatible with a more flexible, looser relationship for other countries outside the single currency.

“Change in the EU is worth fighting for and that change would not just benefit Britain but every country in the EU.”

Well, the UK may just have found a new, and somewhat unexpected, ally in this fight.