The EU’s structural funds – still heading in the wrong direction? 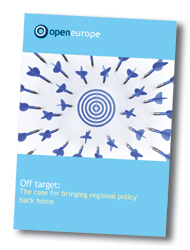 A new report published by the EU’s Court of Auditors yesterday provides an interesting reminder of the failings inherent in the current EU regional policy, whereby the cash is recycled between every region in every member state – irrespective how wealthy – via the EU’s structural funds.

The EU has allocated around €65bn towards co-financing the construction and renovation of roads between 2000 and 2013, and the ECA report focuses on 24 projects in Germany, Greece, Poland and Spain, coming in at a total cost of around €3bn. The good news is that, unlike in one particularly notorious case in Southern Italy, the money was actually used to build or upgrade roads which “delivered savings in travel-time and improved road safety”.

However, the report then goes on to state that:

“insufficient attention was paid to ensuring cost-effectiveness. Most of the audited projects were affected by inaccurate traffic forecasts. The result was that the type of road chosen was often not best suited to the traffic it carried. Motorways were preferred where express roads could have solved the traffic problems. 14 out of 19 projects recorded less traffic-use than expected.”

“due to the lack of appropriate indicators (such as actual employment created, share of new transit traffic, number of new enterprises in the region)… it is not possible to assess whether the funded projects actually generated the expected economic impact.”

This is a microcosm of the wider problems with EU regional policy. As we argued in our 2012 report on this topic: “There are still a number of problems with the funds, including an unsatisfactory correlation between funding and results.” We also flagged up that, contrary to some of the Commission’s more boastful claims, due to the inability to consider individual indicators in isolation, it was virtually impossible to objectively assess the economic impact of the structural funds.

Essentially, project selection across the EU is driven more by the fact that there is a pot of money that has to be spent, and less by the existence of a genuine economic case or by seeking to maximise added value. The report also found that the cost of constructing roads varied hugely both between and within countries. Interestingly, the German projects were the cheapest, followed by Greece and Poland, with Spain being the most expensive. 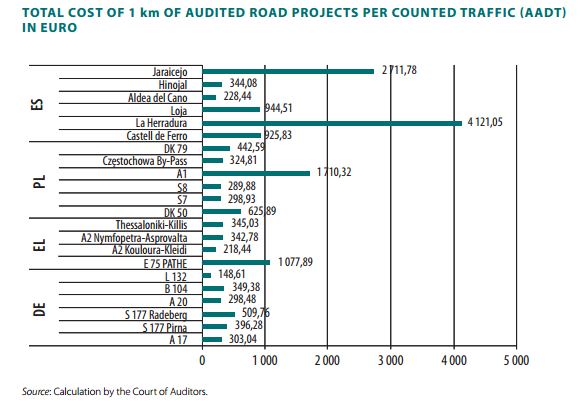 Fundamentally, this also illustrates another point we raised in the report – namely that the structural funds come with significant opportunity costs – i.e. where spending leads directly to other, more productive economic opportunities being wasted. For example, the money spent on the La Herradura project in Spain – where actual traffic was 50% lower than planned – could have been spent on a different project with higher economic returns or not raised via tax and sent to Brussels via national governments in the first place.

This also underlines another critique set out in the report – that far too much cash from the structural funds has been funnelled into infrastructure construction (some of it clearly not corresponding to a genuine economic need) in the countries most affected by the eurozone crisis – Spain, Portugal, Greece etc. resulting in a number of ‘white elephant’ projects.

In wealthier EU countries – and also those most affected by the eurozone crisis – EU structural funds are simply the wrong tool for boosting regional development. While there is a case to be made for continued support to less wealthy member states via the EU budget, wealthier member states could both achieve a much needed financial saving but also regain the ability to tailor the rules to better suit their own circumstances rather than being constrained by Brussels’ one-size-fits-all framework.

In the UK, such a move would broadly enjoy cross party support and could save the government around £4bn net over seven years – something for Mr. Cameron (or indeed Mr Miliband) to target during the 2016 mid-term review into the long-term EU budget?