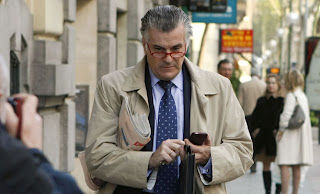 UPDATE (16:00): Another interesting fact from the Rajoy-Tusk presser. When a foreign leader comes to Spain on an official visit, the protocol establishes that, at the joint press conference, Spanish journalists and their counterparts from the visitor’s country are only allowed two questions each.

Today, it had been agreed that the two questions from the Spanish side would come from El Mundo and the news agency EFE. However, Rajoy unexpectedly gave the floor to a journalist from ABC.

Asked by his colleagues at the end of the presser, the ABC journalist explained that he had received a phone call from his editor dictating him the exact wording of the question he had to put to Rajoy – who then replied by reading a short written statement he had prepared.

UPDATE (15:00): At the joint press conference with his Polish counterpart Donald Tusk, Spanish Prime Minister Mariano Rajoy said, “I’m going to fulfill the mandate I was given by the Spaniards” – a clear indication that he’s not planning to resign.

Meanwhile, the first details from Mr Bárcenas’s court hearing are emerging. For the first time, he admitted that he was indeed the author of the ‘parallel’ accounting books published by El País earlier this year (see our blog from last January for further details). Mr Bárcenas reportedly also declared that he made cash payments to Rajoy himself and María Dolores de Cospedal, the Secretary General of Partido Popular, in 2008, 2009 and as recently as March 2010.

Remember the slush fund scandal that broke out earlier this year in Spain? Prime Minister Mariano Rajoy and other senior members of the ruling Partido Popular allegedly received illegal cash payments from the party’s former treasurer, Luis Bárcenas (in the picture). All these payments were registered in ‘parallel’ accounting books that were leaked to the Spanish press (see our blog from last January for further details).

After a couple of months of relative calm, the scandal is now reigniting. El Mundo yesterday published several screenshots from Mr Bárcenas’s mobile, allegedly showing that Rajoy sent him supportive text messages after the scandal was exposed – the most recent one in March – and asked him to keep calm and deny the existence of the secret accounting books.

Unsurprisingly, the opposition Socialist Party has called for Rajoy to resign “immediately” in light of the latest revelations. Equally unsurprisingly, Rajoy’s office denies any wrongdoing and accuses Mr Bárcenas of trying to “deviate attention” from his own judicial problems.

So what happens next? The following points are worth keeping in mind:

Therefore, the risk of snap elections remains small for now – although the scandal will inevitably cast a shadow over Rajoy’s government, at least until things become clearer.

Today, all eyes in Spain will be on two key events: Mr Bárcenas is due to appear in court, and is expected to provide some more details about the latest events. To add a further twist to the story, his lawyer yesterday said Mr Bárcenas didn’t know anything about the publication of his exchange of text messages with Rajoy by El Mundo.

The Spanish Prime Minister is also due to speak in public, in a joint press conference with his Polish counterpart Donald Tusk – which is also going to be interesting. We will keep a close eye on anything coming from Spain throughout the day, so keep following us on Twitter @OpenEurope and @LondonerVince.