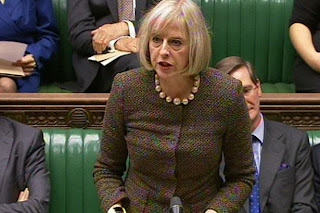 Our Research Director Stephen Booth has written a piece for the Guardian‘s Comment is Free section, where he argues:

The Home Secretary, Theresa May, has announced that the UK will opt out of 133 EU criminal justice measures, using a “block opt-out” negotiated by a previous Labour government. It will then seek to sign up again to some of them, including a “reformed” European arrest warrant (EAW).

As ever, the devil will be in the detail and we should reserve judgment on the government’s reform proposals until we’ve had time to digest them. Nevertheless, there is much here to raise an eyebrow or two. For one, the coalition seems to have arrived at the number of measures it wants to sign up to (35) through a process of “split the difference” between Liberal Democrats who would rather the UK didn’t exercise the opt-out at all and Conservatives who would be inclined to opt out of the lot, or only opt back into a handful. An arbitrary process such as this is hardly the model of principled policy-making.

No one seriously argues that the UK would be better off cutting itself off completely from international co-operation on crime and policing. However, there is a legitimate debate to be had about the institutional form it should take and how citizens’ rights can best be safeguarded, especially given the current backdrop of transatlantic spying allegations. Governments and the powers that be will always be tempted to abuse their authority. The best antidote to this is democratic scrutiny and accountability.

The EU opt-out is not simply a decision about keeping 133 EU law and order measures. It is also about whether the European court of justice should have full jurisdiction over them for the first time – once the UK opts back in to these 35 measures, EU judges rather than UK judges will have the last word on how they are interpreted. This would have been an important debate, because amending EU law in the wake of an EU judgment that results in something our elected representatives did not intend is extremely difficult, as it can only be achieved through complex EU negotiations. Thus, the democratic link to citizens is broken. In the context of the UK’s wider relationship with the EU, an opt-out could have provided the opportunity to debate this fundamental issue.

However, this opportunity has largely been wasted: the temptation to revert to type in any EU debate – be it pro or anti – is often easier than arguing about substance. There are few issues that galvanise Liberal Democrats like civil liberties. Lib Dem backbench home affairs spokesman Julian Huppert has argued that May’s claim that “criminals, terrorists and paedophiles” would want MPs to vote against the UK data communications bill (or “snooper’s charter”) was misleading and the sign of “someone without a rational argument to make”. However, in defending the EAW and other EU measures, Lib Dem politicians including Nick Clegg have used the spectre of “paedophiles, murderers and terrorists” to try to shut down the debate. In addition, the party’s enthusiasm for keeping the EAW stands in stark contrast to its tough stance on the UK-US extradition treaty, particularly in the case of Gary McKinnon. This is despite the fact that, once the UK opts back in, the EAW is part of a permanent, supranational EU legal system and the UK-US treaty is a bilateral arrangement which, in theory, can be rejected by either party.

The Conservative side of the coalition has not covered itself in glory either. While it is clear that Conservatives are the driving force for taking the opt-out, there has not been a robust principled defence of this move by Conservative ministers, particularly on the role of the EU’s court, and therefore, why the party’s often cited robust stance on law and order at home could be compatible with exercising the block opt-out.

Poll after poll shows that the British public would like a looser relationship with the EU, including on crime and policing issues. My view is that the UK should return to a system of bilateral, practical crime and policing co-operation with EU partners, which does not involve ceding control to the EU institutions. Others may take a different view, but let’s debate the issue.