Has Martin Schulz been receiving some good PR advice recently? 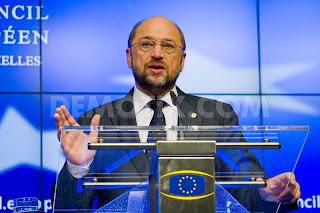 In an interview with Dutch magazine Elsevier, asked about the Dutch government’s recent ‘subsidiarity review’ – which concluded that the time for ever closer union in every single policy area was over – he endorses the call for the EU to give some powers back to member states and only focus on essential things:

“For a start, we shouldn’t call everyone who is critical a eurosceptic. I am an enthusiastic pro-European, but I think that the EU is in a catastrophic situation. In the Netherlands and Germany, people have the feeling that they pay too much and that they get nothing in return. In Greece, that they’re under a foreign regime. In order to deal with this, we must return Brussels’ tasks to the national states.”

“The Union must concentrate on international trade, migration, tax evasion, climate change, organised crime. For these things, the EU needs to be well equipped.”

Naturally Schulz adds the usual caveats that the Commission must be an ‘EU government’ responsible to both the European Parliament and  member states. Moreover, he has expressed similar sentiments before so we are not sure to what extent this will be followed up with concrete action. It is nonetheless interesting that such a self-avowed EU federalist feels the need to publicly make the argument that EU powers can flow both ways.