EU Referendum: Now a question of when not if? 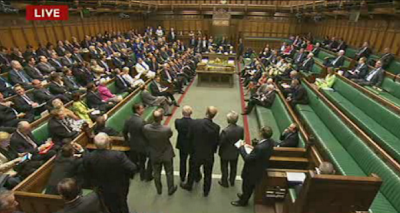 Today’s Commons debate on whether to hold an EU referendum in 2017 – brought forward by James Wharton MP through a so-called private members bill – was interesting as much for what was said as for what was not.

As expected, Conservative MPs came out in droves to proclaim their commitment to an in/out referendum if re-elected. Shadow Foreign Secretary Douglas Alexander criticised 2017 as “an arbitrary date”, although he yet again appeared not to categorically rule out an EU referendum under a Labour government. So that door is still left ajar. He also reiterated Labour’s commitment to EU reform, proving how entrenched this concept now is across the political spectrum.

Interventions during the debate showed that within the Labour Party there is now a spectrum of opinion on the EU referendum, although in fairness Labour and Lib Dem participation was limited (see picture). There are those against a referendum because of a long held attachment to the EU; those like Keith Vaz MP who want the UK to remain an EU member but also want a referendum to strengthen democratic legitimacy; and those, like Kate Hoey or Dennis Skinner who have long been opposed to the EU and want the UK to leave altogether. In addition, there are many on the Labour benches who see the entire issue as a valuable party-political stick with which to beat the Conservatives.

Labour has so far managed to avoid a divisive public debate on the issue but with the Conservatives – who now appear relatively united – having put them on the spot, a familiar question reappears: if polls are close leading up to the 2015 general election, will Labour gamble on being seen as the ‘pro-status quo anti-referendum party’ – or will it pull the trigger?

Clearly, there are powerful voices within the Labour party who are feeling increasingly worried about such a prospect. So what will the endgame look like? Several different scenarios are emerging:

Tory majority: If the Conservatives win the next election outright it is now inconceivable they would avoid a referendum.

Continuity of Tory-Lib Dem coalition: Lib Dems are unlikely to promise a referendum in 2017 so the question would then become whether David Cameron insists on a referendum as a the price for a renewal of the Coalition. Cameron has been less than clear on this point. He has said “if I am Prime Minister” there will be a referendum, but the official write up says “if a Conservative Government is elected in 2015, they would… hold an in-out referendum to let the British public decide.” Would Nick Clegg block it (assuming he is even still the leader then).

Tory minority government: With a more stable economy both the Tories and Lib Dems could decide not to formally renew the coalition, with the former instead ruling as a minority government. Depending on the exact parliamentary arithmetic, a Tory referendum in 2017 could gain sufficient support from Labour and Lib Dem rebels and Northern Irish MPs.

No Labour pledge followed by a Labour victory: Only chance for a referendum would be if the “referendum lock” is triggered as part of an EU treaty change that transfers powers from the UK to Brussels – Labour has pledged to keep the lock in place. Perhaps they can somehow elevate that into an In/out referendum, and get around the pickle they’re in that way (there’s talk about this in Labour circles).

No Labour pledge followed by a Lib-Lab coalition: As previous scenario – both Labour and Lib Dems are in favour of the referendum lock.

Labour pledge followed by Labour majority: Question would then be on what terms (a straight In/Out vote or something else) and when (immediately after the election or mid-term).

Labour pledge followed by a Lib-Lab coalition: That would depend on the Lib Dems and whether Labour sees it as a deal breaker. It’s easier to Labour ditching the referendum pledge in coalition negotiations than the Tories. However, a Lib-Lab Coalition Government might end up with a referendum anyway due to cross-party backbench cooperation by Labour and Conservative MPs.

Labour throws back the ball in Tories’ court: As has been floated, Labour could seek to amend James Wharton’s bill, to suggest a referendum before 2017 – some have floated 2014, at the same time as the European elections. This would be extremely awkward for Tory MPs, many of whom would feel obliged to vote for such an amendment so as not to be seen as anti-referendum. The Tories are also vulnerable to criticism that 2014 is no less of an arbitrary date than is 2017 (are we confident that all the changes in Europe and in the UK-EU relationship will have taken place by 2017 so the British public would have the choice of two clear alternatives?)

Regardless, there was a feeling when listening to today’s debate that a referendum on Europe is now not a matter of if – but when. Disappointingly, the debate largely ducked a question just as fundamental as the referendum debate itself: whoever wins the next election will have a series of European challenges in its intray: a Europe that desperately needs reform, a changing Eurozone with bailout programs running out, a series of pending EU court cases, potential treaty changes and more.