Portugal’s coalition fights to keep its head above water 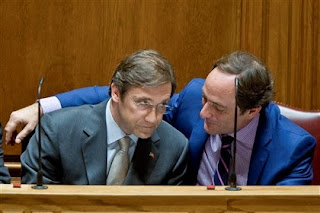 UPDATE (17:15) – First reports of an agreement to keep the coalition alive. Stay tuned for more details.

UPDATE (16:40) – Portuguese Prime Minister Pedro Passos Coelho and Foreign Minister Paulo Portas have just come out of another (swift) round of talks.

The outcomes of their third meeting in less than 24 hours are still unclear. Passos Coelho is now heading to the Belém Palace – where Portuguese President Aníbal Cavaco Silva is waiting for him.

UPDATE (14:45) – The second meeting between Portuguese Prime Minister Pedro Passos Coelho and Foreign Minister Paulo Portas is over. It was “very positive” – according to the Prime Minister’s office – but inconclusive. Negotiations over a new coalition agreement will therefore continue.

According to the Portuguese media, Portas may backtrack on his resignation. If he did so, he would reportedly be appointed Deputy Prime Minister (the post is now vacant after former Finance Minister Vítor Gaspar quit) and Economy Minister (which in Portugal is a separate portfolio from Finance Minister).

More interestingly, a source quoted by Diário Económico suggests that a revamped coalition agreement would involve discussing “a new compromise with the [EU/IMF/ECB] Troika” – so potentially a relaxation of Portugal’s deficit and reform targets.

As we noted in yesterday’s flash analysis, tensions in the Portuguese coalition reached critical levels over the past few days. They have eased off somewhat overnight, but there is still plenty of uncertainty around.

What are the potential outcomes?

We will continue to update this blog throughout the day with developments and news as we get them.