Cypriot deposit outflows continue but slow in May

As we reported last month, the outflow of Cypriot deposits has continued apace despite the continuation of capital controls (even once the impact of the bank restructuring is stripped out the outflows have totalled around €3bn for each of the last two months). 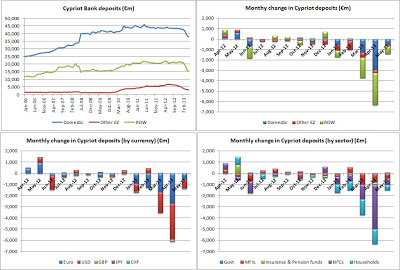 Judging from the above graphs (click to enlarge), there seems to have been some improvement in May with the outflow slowing to €1.4bn. This remains a sizeable amount given the continuation of the capital controls.

Of the outflows taking place it seems fairly evenly split between domestic depositors and those from the rest of the world. The outflows also seem to be split fairly evenly across sectors. It’s hard to draw any stark conclusions from this set of data. It seems that both households and firms are continuing to draw down their deposits at a rapid pace and those foreign firms which can withdraw money are still doing so, albeit in small amounts.

The question remains, with Cypriot growth prospects looking so bleak, when and where will this outflow stop?