Commission’s draft budget for 2014: The Good, the Bad and the Ugly

While all eyes will be on George Osborne and Ed Balls this afternoon, the EU Commission has slipped out its draft annual budget for 2014. This is important as it the first budget to be drawn up using the reduced expenditure limits (or ‘ceilings’ in EU-speak) agreed by David Cameron and other EU leaders in February. However, the European Parliament so far refused to sign off on these, so they remain provisional for the moment (more on this later). Here is our breakdown of the content of the budget according to the good, the bad and the ugly, continuing an earlier OE tradition.

Compared with 2013, there’s a cut to the 2014 EU budget. The headline figure is a cut in both commitments and payments from €151.6bn and €144.5bn down to €142bn and €135.9bn respectively. This is a 6% cut in commitments and a 5.8% cut in payments. This is clearly a win for David Cameron who was mandated by parliament to secure a real terms cut in spending, but is also not all what it seems to be (see below). Next year’s savings would be even lower if not for the fact some spending – such as the new €6bn youth unemployment initiative – is being ‘front loaded’ onto this years’ budget.

Some particularly wasteful spending has been cut, for example the commitments on ‘Communication actions’ defined as spending aimed at “increasing the interest, understanding and involvement of citizens in the EU integration and policy-making process” has been cut by 20%.

Somewhat bizarrely, the above savings have only materialised because a lot of money has been added onto the 2013 annual budget via a number of ‘amending budgets’ (a favourite tool for the EP and Commission) – increasing the total from €132.8bn to €144.5bn. If not for this additional cash, we would have seen an overall increase in 2014. While some of this additional spending can be justified – for example to accommodate Croatia – many believe that the bulk has been requested by the Commission simply to use up all the available money left under the current long-term budget rather than because it corresponds to an actual need for funds.

The European Parliament has made payment in full of this amount a pre-condition for agreeing to the 2014-2020 budget, and so far most of it has been pledged by member states (although the UK was recently outvoted on committing an additional €7.3bn of the additional funds requested as annual budgets are decided by QMV, not unanimity). In total, €3.9bn remains outstanding, so taking this off the total means we only have a reduction of 3.2%.

The substance of the budget remains broadly unreformed with the bulk of the budget still going towards distorting farm subsidies and regional development subsidies for wealthier member states (although the proportion of the latter has been reduced). In fairness overall spending on the CAP has decreased by 2.3%, but the amount going on farm subsidies tied to land ownership or production levels (the new CAP rules allow some re-coupling) will go up by 0.3%.

Administrative spending is set to go up again by 1.5% overall. The table below gives the full breakdown: 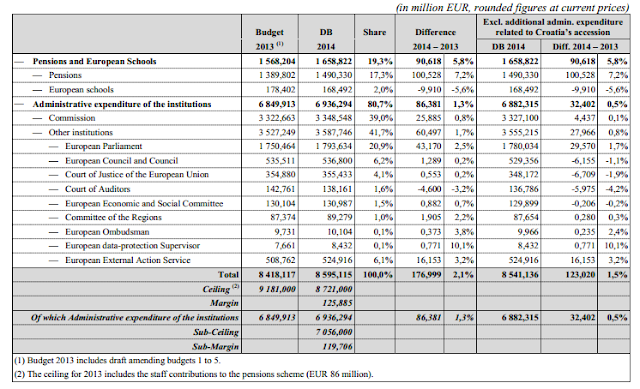 The deal all rests on the European Parliament agreeing to the 2014 – 2020 MFF otherwise the 2014 budget will revert to 2013 ceilings + 2% for inflation. While this would not be an awful result for the UK mainly because of the security guaranteed by the rebate (see here for details), it would nonetheless most probably not result in an actual cut, thereby undermining David Cameron’s claim to have achieved a degree of EU reform by cutting the budget for the first time in EU history.

The EU budget proposal of the Commission for 2014 is again supporting the recession and unemployment instead fighting it.
— Hannes Swoboda (@Hannes_Swoboda) June 26, 2013