‘My reaction was excessive, but the journalist was rude’: Italian MEP caught on camera responds 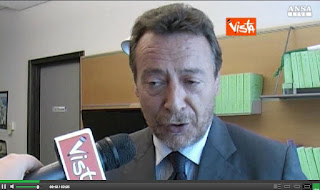 Italian MEP Renato Baldassarre has responded to the posting of the video in which he’s seen pushing and slapping a Dutch journalist (or at least the journalist’s microphone) after being caught on camera allegedly signing in for a day’s work, and then sodding off.

We posted a cut down version of the video on our blog, and it has generated quite a bit of interest .

As we’re always keen on a right to reply, we’ve now translated Mr Baldassarre’s response below. Again, judge for yourself (and if you understand Italian, the full interview is available here).

“First of all, I’m really sorry about that episode and the relevance which was given to it. But the truth has to be re-established. I answered the questions that I understood in a very correct fashion, until the insistence – and I would also say the rudeness – of the interviewer has triggered a reaction, perhaps excessive, but also justified by the fact I was not exactly in the best of moods given that around that time I had received the news that a very close relative of mine had been hospitalised.”

“That said, this is about the usual episodes aimed at highlighting waste and privileges allegedly involving the European Parliament…I have a very high attendance record, 90% in plenaries and 85-86% in the various Committees. On that specific day, I had just arrived and was going to my office where I stayed until 10pm. Therefore, I really believe the whole fabrication around this episode is frankly excessive.”

It is also worth noting that this story has unfolded on the same day as the Parliament has told member states it will not accept the latest compromise proposal on the EU’s long term budget. In other words, MEPs are still holding the budget cut negotiated by David Cameron and other EU leaders hostage. Not a great day for MEPs from a PR point of view…