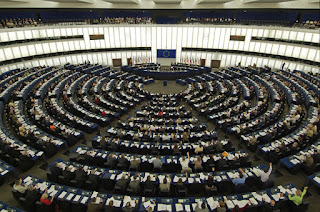 After the umpteenth round of talks on the next long-term EU budget between negotiators from the Irish Presidency, the European Parliament and the European Commission, Ireland’s Deputy Prime Minister Eamon Gilmore announced yesterday,

“We have concluded negotiations on the EU’s multi-annual budget for the next seven years [2014-2020]. I have reached an agreement with the European Parliament’s chief negotiator. We have agreed a package that we are both going to recommend to our respective institutions…This is a balanced package that addresses all four of the issues identified by the European Parliament as important for the EU budget.”

In exchange for agreeing (through gritted teeth) to a historic cut in overall spending from the 2007-2013 budget period, MEPs would secure concessions on “more flexibility” between spending areas and annual budgets, plus a mandatory ‘mid-term review’ of the long-term budget in 2016. There was also an agreement on “a method for carrying forward discussions” on direct taxes for the EU budget – whatever that means – but no binding commitment.

All sorted? Not quite. Alain Lamassoure, the French centre-right MEP who is heading the European Parliament’s negotiating team, told a rather different story to AFP,

The leaders of the main political groups in the European Parliament will meet on Tuesday to decide whether or not they are happy with the latest compromise on the table. In other words, it seems the Irish Presidency was so eager to end its term with a landmark deal that it got a bit ahead of itself.

And not without consequences. German MEP Reimer Böge, from Angela Merkel’s CDU party, resigned as the EPP rapporteur’s on the 2014-2020 EU budget this morning in protest against what he described as “nothing more than a manipulation” from the Irish Presidency. According to him,

A ‘deal’ that turned out not to be a deal after all. We can only wonder what ordinary citizens make of all this posturing, brinkmanship and back-room horse-trading.

Moreover, several important questions remain unanswered. How would this ‘revision’ work exactly, and what would it involve? Are MEPs prepared to drop their demand for it to take place under QMV and not unanimity? What’s the point of having a non-binding discussion on ‘own resources’, given that there’s no appetite for direct EU taxes across the bloc?

Ultimately, MEPs should be careful not to overplay their hand in seeking concessions – if push came to shove would they really veto the agreement painstakingly negotiated by EU leaders?

Things should become clearer next week. For the moment, it’s worth keeping in mind that, whatever the outcome of the negotiations with MEPs, the deal will have to be endorsed by EU member states by unanimity – meaning that the UK would still have a veto over it.