Europe’s most important political party hits the campaign trail: a sneak peak at the EU section of CDU/CSU’s election manifesto 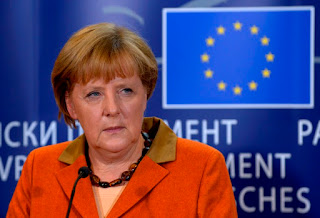 We’ve managed to get our hands on the CDU/CSU’s draft manifesto for September’s federal elections, which is not due to be officially presented until Sunday. Given that the CDU (which always runs jointly with its Bavarian sister party CSU) is the single most important party in European politics by a mile, this is definitely one to watch.

Interestingly, the first section of the manifesto is entitled “Germany’s future in Europe”, indicating how closely these two issues are linked.
Aside from the obligatory pro-European rhetoric, here are the key points we’ve picked out regarding what the parties will campaign for and against on the EU/eurozone:

–  More EU oversight over national budgets with sanctions for breaching the Growth and Stability Pact,
–  So-called ‘Competition Pacts’, i.e. enforceable contracts between the Commission and member states on economic reforms,
–  Increased labour mobility, including greater co-ordination on the recognition of academic degrees and professional qualifications, as well as on access to social security,
–  Retaining the Franco-German axis as the “motor” of European integration, while at the same time wanting to draw Poland – described as the most important partner among the new member states – closer into this fold,
–  Pushing German as one of the main EU languages (along with English and French).

–   Sovereign debt-pooling via ‘eurobonds’,
–   An EU-wide guarantee scheme for bank deposits,
–   A split between the eurozone and the wider EU (“We would prefer to progress with all EU partners”).

So broadly no big surprises, German support for economic reforms and budgetary restraint on one hand and opposition to debt-pooling on the other is well established, although we note the concept of giving the Commission greater powers was not included in the recent Franco-German proposals on the eurozone. The explicit commitment to pushing for greater use of German within the EU hints at a more assertive Germany that is more at ease with itself.

Tellingly, the UK is not mentioned explicitly in the EU section, although the co-operation between the two countries on tax transparency is mentioned elsewhere in the document. From a wider UK perspective, the focus on economic reform and competitiveness is welcome, although the UK would not want to give the Commission greater competence in this area. The UK would also welcome any moves to clarify the rules governing EU migrants’ access to domestic welfare systems – though it’s going to be very interesting to see more details on transferability of benefits, as that’s something many in the UK are keen to limit.

We will of course keep you updated as the campaign progresses.