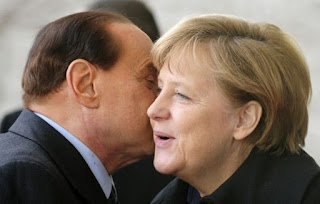 With the next meeting of EU leaders only one week away, Silvio Berlusconi has stepped his anti-austerity rhetoric up by a few notches. He said yesterday,

As usual when Berlusconi is involved, these incendiary remarks form part of a broader communication strategy. Following his party’s poor showing in the latest round of mayoral elections, Berlusconi wants to make clear to his electorate that he is still dictating the agenda to Italy’s coalition government – and that he means business when it comes to keeping his flagship electoral promises, be it about scrapping a property tax on first homes or putting an end to EU-mandated austerity.

However, this time the explicit invite to ignore EU deficit rules is in clear contradiction with the line taken by Italian Prime Minister Enrico Letta so far: Italy does want an easing of austerity at the EU level, but will keep its deficit below 3% of GDP and respect all its commitments. Therefore, Berlusconi’s words risk shaking the coalition government at home, and undermining Italy’s credibility vis-à-vis its eurozone partners.

It will be extremely interesting to see if, once in Brussels next week, Mr Letta pretends his coalition partner Berlusconi never said those words or takes Il Cavaliere‘s advice on board and adopts a tougher anti-austerity stance with German Chancellor Angela Merkel and the other Northern eurozone leaders.