The show(down) must go on: Coalition row over closure of Greece’s public broadcaster continues 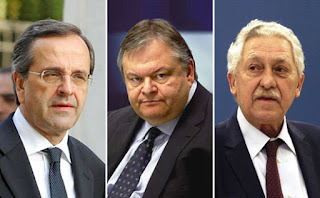 Last week, we noted on this blog that the abrupt closure of Greece’s public broadcaster ERT risked opening a rift in Greece’s ruling coalition – as Prime Minister Antonis Samaras took the decision without the approval of his junior coalition partners, PASOK and Democratic Left.

Tensions have actually mounted within the coalition, and all eyes are now on a meeting later on today between Samaras, Evangelos Venizelos and Fotis Kouvelis (the leaders of PASOK and Democratic Left respectively). Here’s a quick update of what happened over the weekend:

We will keep a close eye on any future developments, so make sure you follow us on Twitter @OpenEurope if you want to stay on top of the latest events in Greece.