Why France can hold up EU-US free trade talks 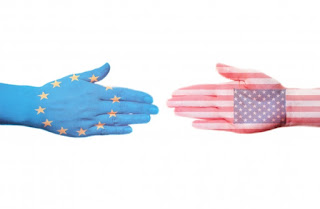 David Cameron wants to use the gathering of G8 leaders in Northern Ireland next week to launch formal negotiations on the planned EU-US free trade agreement. But progress depends on breaking the deadlock in talks today over France’s insistence that any agreement must include protections for its film and TV industries against American imports. These talks are to give the European Commission a mandate to start negotiations.

The French, though, have a pretty strong bargaining position. The EU Treaties (Art 207) set out the procedures for opening and concluding free trade agreements under the so-called Common Commercial Policy.

The Commission makes recommendations to national governments, which authorise it to open negotiations. The Commission then conducts the negotiations in consultation with a special committee appointed by ministers.

In principle, trade agreements are negotiated and concluded by qualified majority voting. However, there are a number of exceptions where unanimity (and therefore national veto) still applies, including “in the field of trade in cultural and audiovisual services, where these agreements risk prejudicing the Union’s cultural and linguistic diversity.”

In a bid to break the deadlock, the European Commission and the Irish EU Presidency have proposed asking EU member states to give unanimous approval to any parts of the draft agreement affecting the audio-visual industry once the negotiations on that specific sector are concluded. However, Le Figaro quotes a source from the office of French Trade Minister Nicole Bricq as saying, “We already have a veto on the conclusion of the agreement, so [the offer] doesn’t change anything for us.”

In a world where trade agreements are increasingly all-encompassing affairs, ranging across the entire economy, this gives France in particular a great deal of leverage.