Mervyn King on the solutions to the eurozone crisis 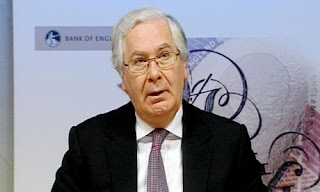 The FT has just posted an interesting and lengthy interview with outgoing Bank of England Governor Mervyn King (pictured), conducted by the FT’s Martin Wolf. Many pressing topics are covered but the short discussion about the eurozone caught our eye (as might be expected).

When asked about the solutions to the eurozone crisis, King sums up the options very succinctly and without the usual qualifying statements needed by those directly involved in the crisis:

“I think there are four [solutions]. One is to continue with mass unemployment in the south, in order to depress wages and prices until they’ve become competitive again. The second is to say, ‘Well, we have to get rid of this imbalance in competitiveness, so we need inflation in Germany.’ That seems unattractive, certainly to the Germans.

“The fourth is to change the membership. Now, I don’t know what the right answer is, and it will depend on their political objectives, but economics tells you that you have to have one or some combination of these.”

A very concise and accurate summary we’d say. Obviously each option can be tinkered and altered but the broad truth is all there.

However, we might go so far as to narrow the options down even further. Option one (which is currently being employed) seems unlikely to be politically or socially acceptable – countries such as Greece, Portugal and Cyprus in particular would struggle to regain competitiveness this way. It would also leave the structural flaws of the eurozone untouched, leaving it incredibly vulnerable to future crises.

Option two also seems unlikely to be sufficient, even if it were an option politically. We would say some element of it is probably necessary for the eurozone, but far from sufficient to solve the crisis. It could also create the ‘uncompetitive union’ which Germany fears most, as although internal imbalances in the eurozone may be eased the actual competitiveness of the bloc as a whole would be much worse than previously. There are also questions about how much such an approach would spillover into growth in the struggling eurozone countries – as we discussed in detail here. Again it also does not tackle the institutional flaws.

Therefore that leaves us with options three and four – something we have noted before.

Before the crisis can ever be solved the true choices facing the eurozone need to be realised. Let us hope that this weekend some of the eurozone leaders read King’s interview.