Deliberations begin as hearings draw to a close in Karlsruhe 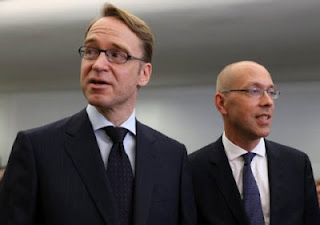 The hearing at the German Constitutional Court into claims against the ECB’s crisis policies is now over. Day one saw verbal jousting between the two men to the left (Bundesbank President Jens Weidmann and ECB Executive Board Member Jörg Asmussen) which we covered on our live blog. Day two of the hearing was a bit more cagey and less political but possibly more revealing in terms of the Court’s thinking.

Constitutional Court Judge Peter Müller kicked off by reiterating the strict rules of the game:

“it is clearly defined in which china shop the elephant of monetary policy is not allowed – monetary state financing.”

“If OMT is ECB’s commitment to buy state bonds to a non-defined extent, than I wouldn’t know how to prevent the contact with the china shop”

Being slightly more direct (as might be expected), Head of the Ifo Institute Hans-Werner Sinn said that the ECB engages in “regional fiscal policy” and that the Central Bank’s OMT programme is basically “a free insurance for investors when a state goes bankrupt”.

It’s clear the Court remains concerned that the ECB could overstep its mandate. President of the Court Andreas Vosskuhle suggested that the current conditions attached to the OMT, the ECB’s bond-buying programme, are on a “very abstract level” but if correctly applied “could be a good middle way…of distinguishing between monetary and fiscal policy”.

A rather diplomatic construction but conditionality is a key issue here, as we’ve pointed out. The fundamental problem is that since there is no legal documentation and the OMT has never been tapped, it is very challenging for the court to judge how strictly the conditions will be applied. They could make a value judgement over whether they trust the ESM and eurozone politicians to fully implement the conditions but this could well be beyond the scope of the legal judgements the Court is allowed to make.

As Süddeutsche Zeitung‘s Markus Zydra points out, there is significant ambiguity around one of Asmussen’s key points – that the OMT is practically limited since it can only purchase short term bonds. This is especially true given ECB President Mario Draghi’s (and other’s) previous remarks that there are no ex-ante limits to the OMT. Chief economists of DZ Bank Stefan Bielmeier put it nicely saying, “there is a dual rhetoric of the ECB…[they] tell everybody what they want to hear” – exactly as we noted here.

A running theme of the coverage following day two has been the signfiicant time given to those arguing against the ECB. ECB proponents reportedly told Handelsblatt “we feel like at an away game”, given the level of opposition support. The paper even goes so far as to question the neutrality of the court’s referees given the line-up of known ECB critics it had called to provide evidence at the hearing (e.g. Hans-Werner Sinn, Kai Konrad, Harald Uhlig, Franz-Christoph Zeitler, Clemens Fuest).

How the Court will rule remains to be seen. It’s clear they have some serious concerns about the policies but are struggling given the hypothetical nature of the case – the OMT remains undefined and unused, so any claims against it rely on second-guessing its implementation. Ultimately, it could be a question of whether they take the ECB at its word or not. Approval of policies but with some extra constraints remains the most likely outcome.

A final ruling is due for September although many involved expect a delay until after the German Federal Elections on 22 September. In the meantime, there are already those calling for a re-match in Luxembourg.