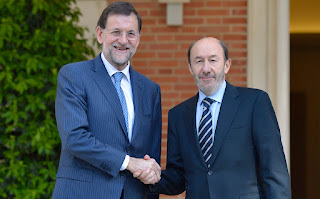 We reported in today’s press summary that Spain’s Prime Minister Mariano Rajoy and opposition leader Alfredo Pérez Rubalcaba have agreed to adopt a common position ahead of the 27-28 June EU summit. The full document – a draft resolution due to be voted on by the Spanish parliament a couple of days before the summit – is now available online.

We found the following paragraph very interesting (the emphasis is ours). The Spanish parliament urges the government to,

“Favour progress on the completion of the internal market through the swift adoption of the pending legislative proposals under the Single Market Act I and II. Particular attention shall also be paid to the full and effective implementation of the Services Directive.”

We couldn’t agree more. As we stressed in a recent report, the services sector represents a huge untapped source of growth for the EU. A quick reminder of the figures we’re talking about: