Will the closure of public broadcaster set the scene for a coalition showdown in Greece? 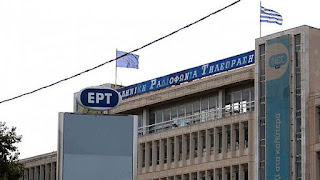 Imagine a Number 10 spokesperson announcing during the afternoon news bulletin that the BBC has become too expensive to run and will be shut down with immediate effect. You would be excused for thinking that the Government and the Corporation have joined efforts to take you for a ride.

Well, this is exactly what happened in Greece – and it wasn’t a joke. Greek government spokesman Simos Kedikoglou went on TV yesterday afternoon to say that the country’s public broadcaster ERT would go off the air a few hours later, because it had become a “refuge of poor transparency and waste.”

As a result, ERT’s almost 3,000 employees have been temporarily laid off. The Greek government says that a revamped and slimmed-down broadcaster (NERIT SA) will be up and running by the end of August. Protests were staged outside ERT’s headquarters yesterday and are continuing today, while ERT journalists are still putting programmes on air via digital frequencies and the internet.

A couple of points are worth making at this stage:

As the Troika has long suggested, it is clear that Greece’s bloated public sector needs to be downsized significantly. That said, it is also clear that this situation has been poorly handled, particularly given the wider political and social tensions already at play in the country. The fallout of this story might be worrying – further splits in the governing coalition and wider public backlash against an austerity programme for which there is already very little buy-in.

We will keep monitoring the situation and give further updates on Twitter @OpenEurope.