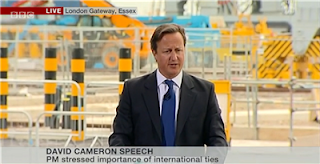 David Cameron delivered a new speech on Europe today (it was not exclusively Europe but much of the pre-speech briefing focussed on this aspect). It was not quite as startling as the last one. The policy of reform, renegotiation and a referendum remains the same – and this clearly is an attempt to show that he can lead on Europe, rather than being pushed around by his backbenchers. However, it does raise important and interesting questions.

This is the part relevant to the UK’s EU membership:

Membership of these organisations is not national vanity – it is in our national interest. The fact is that it is in international institutions that many of the rules of the game are set on trade, tax and regulation. When a country like ours is affected profoundly by those rules, I want us to have a say on them. That doesn’t mean supinely going with the flow of multilateral opinion – the lowest common denominator approach to democracy, as we’ve seen in the past.

…our policy on the EU is clear. In the modern world, you need to work every advantage you’ve got. A single market of 500 million people on our doorstep, that worked properly, that was competitive, that was unbureaucratic and dynamic – that would be a huge advantage in this world. The EU is a way off that goal yet. But I say – let’s try and realise that vision for all our sakes.

That is why we are seeking to shape a new settlement in Europe; to get a better deal for Britain in it and to equip Europe as a whole to compete in the world. And when we have negotiated that new settlement, as I said in my Bloomberg speech, we will give the British people a referendum with a very simple in or out choice: To stay in the EU on these new terms; or come out altogether. It will be an in-out referendum.

Firstly, note the subtle change in tense from the beginning: “it is in our national interest” to be in the EU to saying a “single market… that worked properly… would be a huge advantage in this world”. Which is right.

We have argued that there are compelling reasons for the UK to seek to remain within a reformed EU, such as full access to the Single Market and voting rights on the terms of trade within the Single Market. However, unless the drift towards greater political and economic integration in the eurozone can be accompanied by a looser and more flexible relationship for countries such as the UK – whilst the EU as a whole needs to become more competitive and outward-looking – the British electorate will increasingly look to the exit.

Now that Cameron has promised that the electorate that it will decide, as we’ve argued before, he really does need to crack on with the reform work. We know that Downing Street has invested a lot of time touring Europe to sell Cameron’s vision of reform – this should be acknowledged. Again, this is right thinking. However, it still remains unclear to most national capitals what, exactly, Cameron wants in Europe. William Hague’s Königswinter speech, in which he called for a “red” card for national parliaments, was a major step in the right direction, and one which is drawing sympathy. This needs now needs to be pushed around national capitals. Likewise, the under-sold reforms to the EU’s fisheries policy are good news, as was the EU budget cut.

However, there are many more things the UK government could do – even within the Coalition agreement. For all Cameron’s talk of a reformed and reinvigorated single market, we still haven’t seen the political investment needed to really press ahead with more liberalisation in services. We have outlined a strategy for how to break the deadlock in this area.

Polls show that Cameron’s EU policy enjoys public support but is suffering from a ‘credibility deficit’. There’s only one way to close that gap: get on with it.

So by all means give speeches, but now is the time for action.