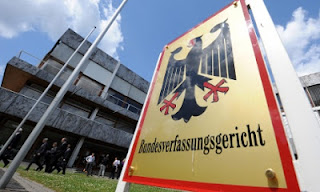 This is set to be an important week for the ECB and therefore the eurozone.

As we noted in a flash analysis this morning, the German Constitutional Court (GCC) will hold a hearing on the 11 and 12 June focusing on whether the ECB’s policies have infringed either its own or the Bundesbank’s mandate, and if these have created fiscal risks without democratic approval.

The focus of the case will be the OMT, the ECB’s flagship bond buying programme, the announcement of which is widely seen to have played an important role in easing the eurozone crisis.

Why is the case important?

With this final point in mind, there was an interesting story in FAZ over the weekend, which suggested that the OMT is not in fact as “unlimited” as had first been thought. Indeed, FAZ claimed that it is limited to €524bn, since the ECB will only be allowed to purchase debt with maturity between one and three years.

This constraint was always known, as we noted when the programme was announced. The cap essentially arises because this is the total amount of debt from Italy, Spain, Ireland and Portugal (i.e. those countries most likely to access OMT). The cap doesn’t seem to be hard and fast then, since countries could simply issue more short term debt. However, this does come with its own risks (another point we raised at the time), and the ECB has suggested it would look to prevent such an approach, although it hasn’t said how.

Handelsblatt goes even further, suggesting that there is an internal rule which limits the ownership of bonds by the ECB to 50% of the given market, suggesting this means the cap is even lower at €260bn.

But even if the cap isn’t quite what it’s cracked up to be, it’s very interesting that the ECB itself is selling it to the GCC as a limit. Clearly, there is some concern about the outcome on its part.

Despite a definitive ruling not expected until the end of the summer at the earliest, and more likely after the September elections, there could well be plenty of interesting revelations and disputes aired over the next few days, which we will of course be covering in detail.