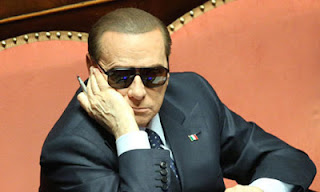 “We now have a strong government…also vis-à-vis Europe. We need this government to go to Brussels and say ‘I’ll do it this way’. We can no longer accept certain diktats. It’s for us to decide what needs to be done to put our economy back on its feet.”

Our regular readers know this is not the first time Berlusconi uses this type of rhetoric (see here and here for similar remarks). But his words have a much greater significance now. The electoral campaign is over, and Berlusconi’s party holds a number of key ministerial posts in the new Italian government – on which he can pull the plug whenever he likes.

As we noted before, Berlusconi’s blackmailing power could lead to Italy taking a tougher anti-austerity stance in Brussels – and this is exactly what Il Cavaliere is trying to achieve. Pressure is now on Italian Prime Minister Enrico Letta, who has so far been a lot milder in his demands for an easing of austerity and has consistently stressed that Italy will stick to its EU commitments.

Letta can’t ignore Berlusconi’s requests, or the survival of his ‘grand coalition’ will be at risk. But he will also have to make these requests sound acceptable to German Chancellor Angela Merkel – who faces a general election in three months’ time. Not the easiest of tasks.