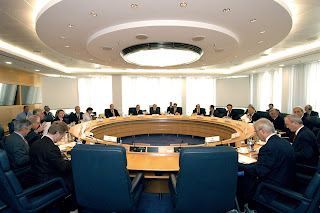 The ECB holds its monthly meeting tomorrow. Below we look at the main topics of discussion, with the ECB weighing some important decisions.

Could the ECB cut its main interest rate again?

The ECB is considering a negative deposit rate
Most reports suggest the ECB Governing Council is split on this issue. At the least this means it is unlikely to push ahead with it. We also believe the problems and complications outweigh the benefits. There has been much written about this but below we summarise the key points.

Logic: banks are now charged for holding large excess reserves (deposits) with the ECB, this will hopefully encourage them to make loans on the interbank market and make more loans to the real economy rather than holding the money at the ECB.

What about all the talk of boosting lending to small businesses?
This focuses around the creation of a new market for securitised loans to small businesses. The logic being: banks make these loans, package them together into securities and then sell them on to other banks and investors. There is a clear demand for quality assets which provide a decent return meaning there could be demand for such securities.

However, the ECB has backed away from grand plans on this issue. As we pointed out previously it was always very hesitant about purchasing such securities itself, with the Bundesbank in particular opposed to such action.

More of the same seems likely
With things ticking over the ECB is likely to hold off on any further drastic action at its meeting tomorrow. It will continue to emphasise that monetary policy will remain loose for some time (the concept of forward guidance which it began to adopt last month to some extent). It may also put more flesh on the bones of schemes to work with the European Investment Bank (EIB) to boost lending to small businesses. Some easing of the collateral rules as we predicted last month is also a definite possibility.

As we’ve said before, the ECB continues to look constrained. It does of course have a few more tools, however, they are in many cases quite extreme and have potential side effects. These are best suited to very extreme scenarios (euro break-up) rather than the wider malaise and long term endemic crisis which the eurozone now faces, particularly given that often (as we are now seeing with banking union) any ECB action sparks complacency and inaction on the part of politicians.