Update 31/05/13 09:40: As we noted below, it seems that the figures do include some of the write-downs of deposits under the bank restructuring (but not all). Apologies for the confusion. As the Central Bank of Cyprus notes the initial write down for Bank of Cyprus depositors is included. This totals around €3.2bn. This means the actual outflow was around €3bn, similar to the previous month.

This is still fairly significant, although we expect much of this may be domestic and due to people and businesses running down their cash reserves. This also likely reduces some of the concerns over the workings of the capital controls. The data does give some feeling for who might be losing from the bank restructuring – US Dollar depositors and foreign NFCs are probably a large share. The concerns over the bank deleveraging and increasing reliance on central bank financing also remain (since they were already well established).

The real test of the deposit flight will come, firstly once the bank restructuring is complete (by end of July) and secondly once the capital controls are removed (who knows when).

Yesterday saw the release of the latest data on the state of bank deposits in Cyprus – which always makes for interesting reading.

The headline figures are pretty terrible. Overall deposits declined by €6.346bn (10%) in April, almost double the level seen in March (when the crisis was in full swing) – despite stringent capital controls being in place for the entire month. However, given their importance, these figures deserve delving beyond the headlines. 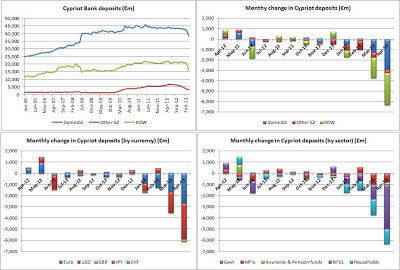 The charts above (click to enlarge) raise some interesting points:

One important point to keep in mind concerns the losses for some uninsured depositors under the bank restructurings. It is not clear from the Central Bank of Cyprus figures whether this has already been accounted for in the data above, although this looks unlikely since the process is still continuing. That said, if it has been, then the actual withdrawals are smaller – though still high. The overall economic impact also remains similar.

What does all this mean for Cyprus and the eurozone?