Despite much fanfare, the European Commission recommends much of the same for the eurozone 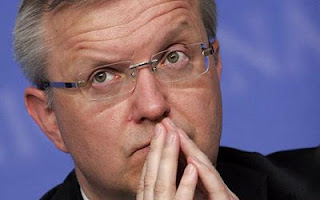 The Commission has today released its country-specific recommendations on economic policy. Below, we highlight the most important suggestions made to some of the key eurozone countries.

The recommendations for France include quite a few suggestions which may be hard to digest for François Hollande’s socialist government.

As we noted several times, Mario Monti’s technocratic government did a good job in cutting Italy’s deficit – less so in implementing structural reforms. Here is what the European Commission would like Italy to do:

Some press reports were (perhaps a bit hurriedly, given how the EU works) suggesting that Belgium could today become the first eurozone country to face sanctions for missing its deficit targets. But EU Economic and Monetary Affairs Commissioner Olli Rehn just told journalists in Brussels that “it would be neither fair or legally sound to apply fines retroactively”, so Elio Di Rupo & co. have been let off the hook for now. These are the key recommendations:

So, for all the talk of this being the ‘end of austerity’ or ‘austerity in retreat’, is much really changing? Sure, there is some tinkering with timelines for deficit reduction (Spain, France and others have been given more time to cut public deficit), but ultimately the eurozone is still going along the same policy path – just slightly more slowly. Cases in point are the countries above, since the clear themes running through all of them are the need for structural reform, welfare reform, fiscal consolidation and liberalising the economy. These are things which have long been advocated and are clearly necessary. The question remains whether they can all be done at the same time by a group of countries which are closely interlinked, and many of which are currently in recession.