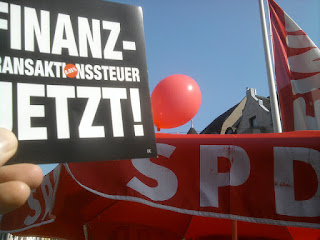 The Bundesbank, The Deutscher Aktieninstitute (DAI), and even EU civil servants from the 11 participating countries have all warned against the FTT in its current form.

Today saw yet another German voice raised again the tax – this time from the very party that is meant to be its greatest champion. Nils Schmid, Baden-Württemberg’s Minister of Finance – from the German social democrats (SPD)— wrote a letter to German Finance Minister Wolfgang Schäuble condemning the FTT in its current form as “rubbish.” Ouch.

Schmid’s intervention, says that “If the financial transaction tax is implemented as is currently planned, initial estimates show that it is likely to have a serious impact on certain segments of the market (money and capital).” He then calls for a “proper configuration” of the FTT.

So why is this important? Twofold:  first, it shows that in light of the overwhelming evidence of the negative economic impact of the FTT in its current form, the support for the proposal is quickly evaporating.

This now extends to the German political parties that have strongly endorsed it. Remember, the FTT is one of the SPD’s main campaigning issues, and served as the party’s quid pro quo for accepting the EU fiscal treaty. Although Schmid caveated his position, saying that he is not opposed to the idea of a FTT in theory, the point has most definitely been made.

Secondly, the FTT controversy has legs to become battleground ahead of the German elections in September. It is an issue that may split politics, both, within the parties and on a national level.

Officially, Schmid’s letter was met with a standard diplomatic line from the German Finance Ministry – which says it is taking concerns raised by Schmid and German banks “seriously.” They won’t say so in public, but the German finance ministry was most likely nodding approvingly…

Meanwhile, deputy chairman of the FDP parliamentary group ,Volker Wissing, saw his opportunity to strike – and took it, saying that Schmid’s letter shows with which “naivety” and “rose-tinted blindness”, the SPD had driven the demand for a financial transaction tax.

So far the SPD have remained stumm on Schmid’s intervention. But watch this space. If influential figures within SPD are the latest to start make noises about this, then surely, the Commission’s proposal cannot stand?