EEA plus: a model for the future of the UK in Europe? 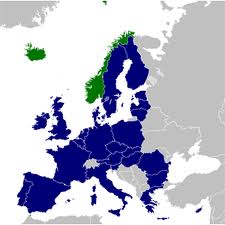 For all the noise about Europe in the UK, British sceptics (with some exceptions) aren’t necessarily great at thinking outside the box.

We have previously looked at the existing models used by countries that have decided against/been refused EU membership (i.e. Norway’s EEA membership, Switzerland’s Free Trade Agreements, Turkey’s customs union with the EU, or simply the WTO) and concluded that they would all have drawbacks for a country and economy as large and diverse as the UK. In particular, the Norwegian model is pretty much a non-starter.

However, there is another hypothetical model, which we will set out in a forthcoming briefing, that could be more attractive if it could be secured: let’s call it ‘EEA plus’.

Now, we don’t necessarily advocate this particular option and this is only a blogpost, but intellectually and politically, it’s far more attractive than anything we’ve seen so far in terms of a fundamental replacement for the current EU structure.

Over the last decade, several figures, including Jacques Delors, former EU Commission President, and Valery Giscard d’Estaing, former French President and author of the EU Constitution, have suggested the UK be given ‘associate membership’ or ‘special status’. Neither concepts have been fully fleshed out, but Giscard d’Estaing suggested that a ‘special status’ could allow the UK to opt-out of future EU policies, which could allow it to continue to vote on policies it took part in but not on those it didn’t. Lord Owen has made a similar argument – which he will expand on in a speech today.

From where we sit, there is one absolutely vital element that has to be added if this is going to work for the UK: voting rights. The great weakness of the EEA model at the moment is that a country like Norway, as we have noted repeatedly, is out of the EU but run by the EU. It just wouldn’t work for the UK (which is home to 36% of the EU’s wholesale finance market, for example).

So what ‘EEA plus’ would involve is single market access but with votes on all laws which are EEA relevant. For EU geeks, it would be a bit like EEA-EU co-decision over single market laws. There are several ways in which this could work. For example, an “EEA council” already exists with members from both the EU and EEA states. This could be expanded to be the effective decision-making body for the EU as a whole in the fields that apply to both constituencies. Alternatively, a majority could be needed in both the EU Council of Ministers and a comparable EEA body for it to become law in both. A range of other issues, such as an arbitrage mechanism and ECJ jurisdiction, would have to be thought through. Also, it would have to be designed so that only genuine single market measures made it into the agreement – not the add-ons such as employment laws (which Norway has to accept) – whilst the UK may wish to stay inside the EU customs union (which Norway and Switzerland are not part of). The UK may also want to be part of other areas, such as crime and police cooperation (perhaps on a bilateral opt-in basis) and there would also need to be consideration about the merits of retaining its veto over EU foreign policy for example.

But, crucially, such an arrangement would get around the massive drawbacks inherent in the Norwegian model. Another great advantage of this model is that it could provide an institutional wrapping for all those countries that for one reason or another cannot be full EU members, and certainly not eurozone members: the UK, Norway, Switzerland and maybe even Turkey. It would be a new mode of European membership – and, if the UK can get its act together, very much the “economic growth” tier.

If you think this is far-fetched, you might be right, but it’s actually not a new idea. In 1989, ahead of the negotiations that would establish the EEA agreement, Delors mooted a “more structured partnership with common decision-making and administrative institutions”, which would have potentially given those countries market access and decision making powers, rather than the limited right of refusal that EEA countries currently have.

In a speech in 1989, discussing the potential approach to those countries who had remained in the European Free Trade Association (EFTA), Delors said:

“There are two options:

(i) we can stick to our present relations, essentially bilateral, with the ultimate aim of creating a free trade area encompassing the Community and EFTA;

(ii) or, alternatively, we can look for a new, more structured partnership with common decision-making and administrative institutions to make our activities more effective and to highlight the political dimension of our cooperation in the economic, social, financial and cultural spheres.

It would be premature to go into the details of this institutional framework. I have my own ideas, but they need to be discussed by the new Commission and then informally, without obligation, with the countries concerned. It should be noted however that the options would change if EFTA were to strengthen its own structures. In that case the framework for cooperation would rest on the two pillars of our organizations. If it did not, we would simply have a system based on Community rules, which could be extended — in specific areas — to interested EFTA countries and then perhaps, at some date in the future, to other European nations.

But if we leave the institutional aspect of such a venture aside for a moment and focus on the substance of this broader-based cooperation, several delicate questions arise. It becomes clear in fact that our EFTA friends are basically attracted, in varying degrees, by the prospect of enjoying the benefits of a frontier-free market. But we all know that the single market forms a whole with its advantages and disadvantages, its possibilities and limitations. Can our EFTA friends be allowed to pick and choose? I have some misgivings here.”

This option could probably qualify as both “in” and “out”. For one, it would be very similar to the Single Market plus deal that Boris Johnson has argued for in the past and, could be defined as staying in the EU, although on a radically different basis.

A final sobering thought: the final result of the EEA talks only granted EEA states ‘decision-shaping’ powers through representation on non-legislative committees and consultation with the EU Commission and a right of refusal that is relatively weak becuase it can result in loss of market access – giving an indication that this will be a challenge to achieve.