When it comes to the question of whether the UK ought to stay in the EU there are two key considerations. Is continued membership the best solution from an economic perspective (trade, regulation etc) and also is it democratically sustainable? (Others will also cite ‘influence’ and geopolitical clout).

Leaving aside the first consideration for now, the second one has long generated a heated debate, not least in the comment section of our blog, with some regular readers pointing out to us that a majority of the UK public wants to leave the EU. End of story.

In his Europe speech, David Cameron warned that support for the EU was “wafer-thin” – which as we highlighted at the time was a long-term trend (albeit exacerbated by the crisis). 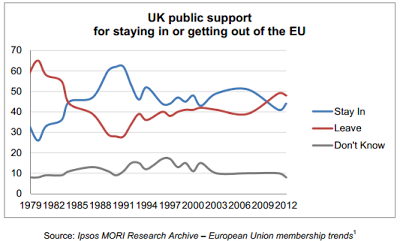 Recent polls have shown an ever larger margin in favour of exit, with a widely cited ComRes poll over the weekend showing that 46% would vote to leave, 24% would vote to stay in, with 30% undecided.

However, there is, of course, an important sub-story here. While this and similar polls have been interpreted by some as a mandate for withdrawal, when a supplementary question about restoring “some EU powers” to the UK is posed, the proportions change quite dramatically with 43% (including 48% of Conservative and 20% of UKIP voters) voting to stay in, 24% voting to leave regardless, and 34% undecided. These figures are consistent with the results of similar questions asked in a number of opinion polls in recent times.

In fact, restricting the choice in the EU debate to only In/Out is rather odd. How often does that happen in other areas of public policy? Would a choice between a 100%, all encompassing welfare state or no welfare state at all, for example, be a fair choice put to the British public? Unlikely, as most of the public wants something in between.

That we consistently see such a large swing in opinion from ‘Out’ under a straight In/Out scenario to ‘In’ under renegotiated terms shows that one of the clearest trends in UK public opinion is that the UK public wants to see new EU membership terms first, and only then withdrawal if that fails.

As such, for those who cite the issue of democratic legitimacy as their prime motivation, whilst they most certainly have a point, there is no reason not to at least give Cameron a good shot at his strategy of re-negotiation followed by a referendum.

The democratic question is also frequently cited by those who demand an immediate referendum, including the MPs who voted in favour of the amendment to the Queen’s Speech last week. However, buried in the poll data was an interesting finding that ought to provide some food for thought – 20% of voters (including 52% of Conservative voters) said they had more sympathy with David Cameron while 18% sided with backbench MPs. Meanwhile 48% said they did not have more sympathy for either side.

If there was an overwhelming support for an immediate UK exit – as opposed to substantially reducing the EU’s powers in Britain – one would have suspected far greater support for the handful Tory backbenchers who are pushing for an early referendum bill. This isn’t to say that there is a major trust issue when it comes to Europe, and that some Tory backbenchers didn’t make valid points last week, but merely that the public, again, is basically quite content with the basic idea of the UK negotiating new membership terms followed by a public vote.

At the same time though, politicians and officials who think they can fudge this process or procrastinate over addressing the EU’s involvement in too many areas of national life ought to be very careful. The electorate’s desire to staying the EU is clearly predicated on substantial reforms taking place.