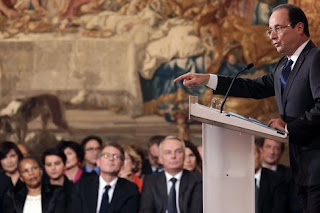 The French media called it François Hollande’s “grand oral exam”. The French President has just held a big press conference at the Elysée palace marking his first year in office. And he said a couple of very interesting things about his vision for the eurozone and Europe.

Hollande pledged to launch an “offensive” to “drag Europe out of its lethargy”.

He called for an “economic government” for the eurozone,

“which would meet every month, with a real president appointed for a long term and who would be assigned this as his only task.”

“This economic government would discuss the main economic policy decisions to be taken by the member states, would harmonise taxation, would start convergence in the social [policy] domain…and would launch a plan to fight tax fraud.”

As if these remarks weren’t controversial enough, Hollande re-stated his belief that the eurozone should have its own “budgetary capacity” and “the possibility to, gradually, borrow money”. In the Q&A session he also suggested the ECB could be doing more on liquidity.

The French President concluded the EU-related part of his keynote speech by saying,

“Germany has said several times that it is ready to move to a political union, to a new stage of [European] integration. France is willing to provide the content to this political union.”

With a real coup de théâtre, Hollande gave himself “two years to achieve” this political union.

It will be extremely interesting to see what the response from Berlin will be. For the moment, Hollande’s press conference is another reminder of how distant France and Germany are in the debate over the way ahead for the eurozone – with Paris sticking to its ‘solidarity/integration first and supervision/discipline later’ line, and Berlin insisting that things should evolve the other way around.