Where do EU member states stand on bank bail-in plans?

It’s been pretty tough to follow where countries stand on the latest proposals for the EU’s Recovery and Resolution Directive, not least because the debate has lasted three years with people mostly talking past each other.

But the Cypriot crisis has now focused minds and a deal is top of the agenda. The proposal will lay out rules for bank bail-ins and dealing with cross-border banks, while it also links closely with plans for a eurozone banking union. To clear up the differences, we have put together a table. 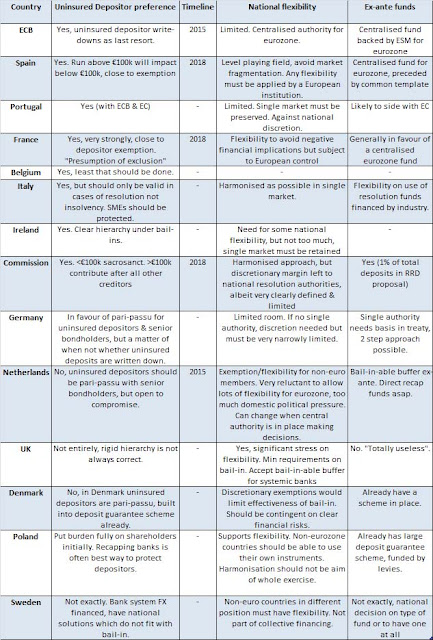 As you can see, there are some big splits remaining. The ECB, Spain, Portugal and France (amongst others) want a clear depositor preference regime – where uninsured depositors are the last to be written down. On the other hand, Germany, the Netherlands and the UK want more equality between senior bondholders and uninsured depositors. Going even further, there are Sweden, Poland and Denmark – which have already clearly defined national schemes which do not fit well with the EU plans for a bail-in hierarchy.

Another area of disagreement is the amount of national flexibility. Sweden, the UK and the Netherlands are pushing hard for flexibility, particularly for non-euro members. This has some backing from Germany. Further disagreements over the timeline for implementation and the level of resolution funds needed remain a bit of a free for all.

The few points they do agree on include: complete protection for insured depositors, a broad bail-in scheme and (somewhat ironically) the fact that this legislation is urgent.

We will keep updating the table as the negotiations develop. There is a lot of talk of compromise but as of yet there is a long way to get there.