Nick Clegg: EU referendum a question of "when not if" 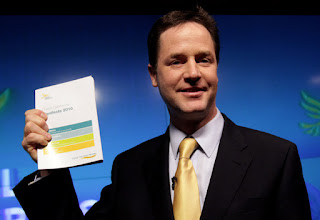 With David Cameron away in the US, Nick Clegg took to the dispatch box for Prime Minister’s Questions today. Unsurprisingly, there was no shortage of references to EU referendums, most of them of a hostile nature. Ahead of today’s debate on the ‘referendum amendment’ to the Queen’s Speech, Clegg was repeatedly asked why he would not support the calls for an in/out referendum as pledged in the infamous 2008 Lib Dem leaflet (calling for a “real” referendum on Lisbon) and in the party’s 2010 manifesto.

Clegg responded that this issue had been settled by the passing of the 2011 EU Act which contains a ‘referendum lock’ in the event of EU treaty change, and accused the Tories of “moving the goalposts” with their policy of an in/out referendum in 2017.

But, within this bit of rhetorical politicking, Clegg said something rather interesting. He said that, due to the ‘referendum lock’, it was a matter of “when, not if” there is an EU referendum “because the rules are bound to change” as a result of developments in the eurozone.

Clegg accuses Tories of moving goal posts on EU referendum BUT says matter of ‘when not if’ as EU rules bound to change triggering a vote
— Nick Robinson (@bbcnickrobinson) May 15, 2013

Well, if the rules are “bound to change” why aren’t the Lib Dems actively supporting David Cameron’s proposals to reform the UK’s relationship with the EU – or at least putting forward their own vision – and then putting that to a referendum ? Or would the Lib Dems rather the rest of the EU changed the rules without active input from the UK Government? Good luck winning any kind of referendum on that basis Mr. Clegg.