Splits in Germany (and beyond) over banking union? 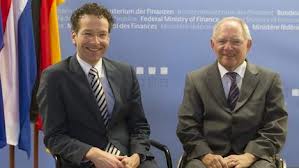 It’s been a week of ‘splits’ over Europe and it looks like another one may be emerging – although this time in Germany.

German Finance Minister Wolfgang Schäuble had an article in the FT arguing:

“While today’s EU treaties provide adequate foundation for the new supervisor and for a single resolution mechanism, they do not suffice to anchor beyond doubt a new and strong central resolution authority.

We should not make promises we cannot keep. The overly optimistic predictions about a single supervisor starting work as early as January 2013 cost the EU credibility.

A two-step approach could start with a resolution mechanism based on a network of national authorities as soon as the new supervisor is operational, the resolution directive has been adopted and the Basel III capital requirements are in place.

A banking union of sorts can thus be had without revising the treaties, including a single supervisor; harmonised rules on capital requirements, resolution and deposit guarantees; a resolution mechanism based on effective co-ordination between national authorities; and effective fiscal backstops, also including the European Stability Mechanism as last resort.”

Essentially, pointing out that a full centralised banking union is some time away, post EU treaty change. This potentially has implications for the UK, as much of Schäuble’s solution, with the exception of the common eurozone supervision, would apply to all 27 members – the question for non-eurozone countries, including the UK, is how they will be affected by the ‘second stage’ of his solution. On the other hand, treaty change, as we’ve noted before would potentially enable the UK to put forward its own amendments.

However, German ECB Executive Board Member Jörg Asmussen espoused a different view in comments to the German press this afternoon:

“It is the aim [of the banking union] to make the Eurozone more robust against banking crises with an orderly, cross-border resolution of systemically relevant banks without leaving the burden on the taxpayer or the central bank.”

So, much stronger on the need for a clear centralised authority as soon as possible, preferably when the ECB takes on its supervisory role at the start of next year. This also seems to imply then that such a move could be done without changing the EU treaties.

To be honest this is not an entirely new position, it is something other members of the ECB have previously called for. Nevertheless, it represents a fairly significant split between two leading political voices in Germany over what is now the key policy for reforming the eurozone.

It’s also worth noting that at a press conference earlier today the Spanish and Portuguese leaders both put forward a similar argument to that of Asmussen on the need for an immediate ‘full’ banking union. Meanwhile, Eurogroup Head Jeroen Dijsselbloem said that the issue of treaty change could be dealt with “later on” but admitted that “understandable questions” were being asked on this front.

We, as with all those following the crisis, wait with bated breath for German Chancellor Angela Merkel to declare which side she comes down on. So far she has managed to dodge taking any big eurozone decisions ahead September’s election in Germany, but with key discussion on banking union coming up next month its not clear whether she can continue to do so on this one.