Alarm für die SPD: German voters not impressed by the party’s approach to the eurozone crisis 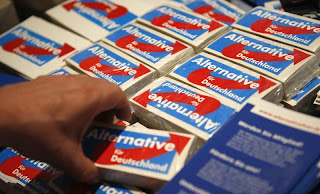 We thought we’d revive an old Open Europe tradition today – Friday afternoons = German polling time. And we certainly have some interesting news to bring you from a new ARD Deutschlandtrend poll published yesterday.

First off the parties – no huge variance here compared to other recent polls: CDU/CSU on 40%, SPD on 26%, Greens on 15%, Die Linke on 7% and FDP on 4%. Angela Merkel’s lead here looks solid, the question is will the FDP make it over the 5% threshold?

As we’ve noted before, if the FDP fails to re-enter the Bundestag, it is likely to be in significant part because of the performance of the new German anti-euro party Alternative für Deutschland which appears to have settled in recent polls on 3% (having hit a high of 5% a couple of weeks ago). Interestingly however, 37% said that it would be good if AfD won seats in parliament compared with 58% who said it would be bad; a significant pool of potential support.

The poll also has some worrying news for the SPD in particular – 70% of respondents said that the party had not really made it clear how it intended to solve the eurozone crisis or to differentiate its own policies from those of the government. This is something we’ve flagged up before – rhetoric aside, the SPD’s eurozone policy is broadly the same as that of the coalition’s. The question is, if the party is tempted to go for greater differentiation in this area, would it take a tougher stance (like it did on Cypriot banks) or a softer stance (e.g. on some form of debt-pooling or a dedicated ‘growth fund’).

The poll also confirms the SPD Chancellor candidate Peer Steinbrück’s dreadful head-to-head record against Merkel – despite a small improvement in his ratings he still trails her by 28% to 59%.

Finally, 76% of respondents said they expected the euro to survive the crisis, although 29% said they want the return of the Deutschmark. 58% said that the government ought to do “everything possible” to ensure that this happens which is interestingly vague – does it mean greater EU-wide fiscal supervision or a more activist ECB? We suspect that if the latter were offered as a specific policy option it would not gain such high support.