Merkel and Letta shadowbox on ‘growth’ vs ‘austerity’ 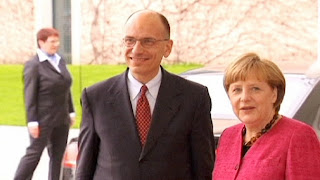 New Italian PM Enrico Letta paid his first official visit to Germany yesterday, only hours after delivering his inaugural address to the Italian parliament. Much has been made of his strong ‘pro-European’ yet ‘anti austerity’ stance – so how would this go down with Die Kanzlerin? Here are some quotes from yesterday’s press conference:

On ‘growth’ versus ‘austerity’

Letta: “We have done our bit [on budget consolidation]…Europe has to implement growth policies.”

Merkel: “We have to free ourselves from this misconception that growth and budget consolidation are opposed. Solid public finances are a precondition for growth. And growth is not only the state giving money, but it’s creating conditions for small and medium enterprises to feel at home, to be able to invest and open up jobs. And for that we need structural reforms, good schools and universities, investments in research.”

On national responsibility vs ‘European Solidarity’

Letta: “In the past five years of crisis we did not find sufficient solutions because there was not enough Europe. This is my objective – and also that of Germany, because both our countries have a federalist vocation… If we reached these objectives [banking union, a fiscal and economic union and a political union] we could solve our domestic problems much easier.”

Merkel: “We want to ensure Europe emerges from this crisis stronger than it went into it. As part of that every country must do its part.”

Merkel: “Every country must complete its own tasks… [Italy] has already made significant progress on this path.”

Overall, the tone of the press conference and meeting was fairly amicable and concilliatory. That said, there are clearly a number of potential flashpoints. For all the pro-European rhetoric, for Letta ‘more Europe’ clearly involves more financial help for Italy, be it via a bank resolution fund or debt-pooling and not more EU scrutiny of national tax and spending decisions which is the German approach – note Merkel specifically referred to the fiscal treaty as an “element of consolidation” and the ESM as “an element of solidarity”.

As we’ve pointed out previously, Italy still faces a number of challenges – finding a way of balancing the books without money from the planned property tax (the cancellation of which was demanded by Berlusconi) and also re-starting the structural reform agenda which stalled under Monti following a promising start. Failure to achieve progress on these fronts will inevitably trigger tension with Germany.

A sign of things to come could be this comment from (German-born) Josefa Idem, Italy’s new minister for Sports and Equal Opportunities who told ZDF that she “understands that the people most directly affected by the crisis and who draw a direct link with the austerity measures bear an aversion towards Mrs. Merkel.”