The ECB looks set to cut its main interest rate by 0.25% to 0.5% on Thursday (while keeping the deposit rate at 0% due to concerns about distortionary effects of negative rates).

Why is the ECB considering cutting rates?

Will it have any impact? 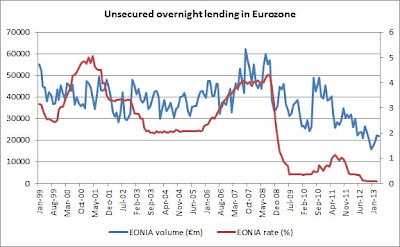 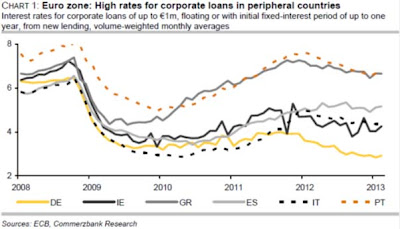 What other tools does the ECB have?

Communication: ECB indicates willingness to keep monetary policy loose and step in to aid markets if needed. This has been used effectively by the Fed.
Probability: High, especially in coordination with rate cut.
Effectiveness: Minimal boost since it is already being pursued to some extent, more to reassure markets.

Easing collateral rules: ECB widens the range of assets which it accepts as collateral in exchange for its loans. May also decrease the ‘haircut’ applied to the value of the loans (thereby increasing their worth as collateral). This is likely to be targeted on SME loans and securities made up of SME loans.
Probability: High, if not this month then in June, particularly if economic data continues to be poor. Effectiveness: Limited, could help bank funding but unlikely to boost SME lending significantly. More risk taken onto ECB balance sheet, likely to widen divisions with Bundesbank. Has been done previously and had little impact.

Outright purchases of SME loans and securities: ECB purchases securities of bundled SME loans, similar to the purchases it made under the Covered Bond Purchase Programme and the Securities Markets Programme.
Probability: Very low. Draghi has previously suggested he sees it more as the job of institutions such as the EIB to help SMEs. Furthermore, the level of SME ABS is limited since they rely heavily on bank loans for funding (another reason why the ECB believes a rate cut could help, at least in theory).
Effectiveness: Limited, especially given that the market for such products is not huge. It would also increase the risk taken directly onto the ECB balance sheet (more so than easing collateral) and would provoke an outcry in Germany for overstepping the acceptable level of central bank intervention. Furthermore, such direct purchases are much harder to unwind than loan related policies which expire naturally, selling off these assets will be tough.

A version of the UK ‘Funding for Lending‘ scheme: not really an option for the ECB at this time, contrary to popular belief. The various national regulations and structures aside it is practically impossible since the ECB already applies full allotment (unlimited lending).
Probability: Very low.
Effectiveness: Potentially counterproductive as the ECB would need to end its programme of full allotment in order to then make liquidity dependent on the amount of loans made by banks.

These are to name but a few options being reviewed currently. Other options such as working with the European Investment Bank to promote SME lending would need political assistance, while options such as ‘Quantative Easing’ aren’t viable for the ECB, as we discussed here.

So for all the talk of the rate cut, it will likely have a very minimal impact. The ECB could look to combine it with other policies but the painful reality is that, when it comes to boost lending to the real economy, the ECB has very few options. Constraints from the Bundesbank and concerns over the progression to banking union mean the ECB will likely continue to put the onus on governments to make reforms to boos the economy.