Italian PM launches opening salvo against austerity – but where will the cash come from? 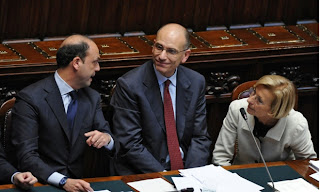 The new Italian Prime Minister Enrico Letta announced his first raft of policies in his first speech to the Italian parliament yesterday. The speech was strong on anti-austerity rhetoric but short on details of how his new approach would be funded – illustrating that ever-so-relevant dilemma in the eurozone (and elsewhere): it’s easy to criticise austerity, much harder come up with alternatives. Here are the key points:

·    The government will scrap up to €6bn worth of tax rises, although Letta provided no detail about how this funding gap would be filled. Much of this move was motivated by Silvio Berlusconi’s insistence on scrapping a new housing tax which was laid out as a precondition for the formation of the grand coalition

·    Some phrases which will make German Chancellor Angela Merkel wince, such as: “We will die of fiscal rigour alone. Growth policies cannot wait any longer”, “[Europe faces] a crisis of legitimacy” and there is a need for a “United States of Europe”.

·    Letta believes Italy’s welfare system is inadequate and will look to broaden it to provide further help to women, young people and temporary workers.

·    Again no details on how such policies will be funded. La Stampa reports that all in, the “Letta Agenda” could cost €20bn. He made no mention of privatisations or the sorely needed reforms to the labour and product markets to make Italy more competitive.

·    Letta did stress that Italy will meet all of its EU commitments and targets.

·    He set himself and the new government an 18 month window in which to achieve the some success in turning around the economy or “face the consequences”.

·    Promised to reform the electoral law and cut MP’s pay.

A very interesting opening salvo from Letta. In fact, not too dissimilar to French President Francois Hollande’s early comments regarding austerity – we can’t help but wonder if his enthusiasm and/or success will wane in a similar way.

One thing that is clear from the speech is the continuing power of Silvio Berlusconi (as we previously noted). La Stampa suggest up to €12bn of the cost of the ‘Letta Agenda’ actually comes from Berlusconi’s demands, while following the speech Angelino Alfano, the new Deputy PM and key Berlusconi ally, said, “I share the words of Enrico Letta’s speech from the first to the last. It is music to our ears.” Meanwhile, Berlusconi also took the opportunity to this morning ramp up his own rhetoric against austerity, calling for the new Italian government to “renegotiate its deficit commitments” with the EU.

All of this sets an interesting tone and background for Letta’s first meeting with Merkel which takes place this afternoon. As we have noted previously and at length, the key question surrounding this whole austerity debate remains, if not through cuts, then who will pay for the party? Germany and the ECB certainly aren’t ready to foot the bill indefinitely and while market sentiment is positive now, it likely could not withstand a new spending spree in a country with a debt-to-GDP of 120% already. We suspect Merkel may make just that very point…