Criticise it all you want, Germany is not going to drop austerity

Writing on his Telegraph blog, Open Europe Director Mats Persson argues that anyone who prays for Germany to U-turn on its eurozone policy after the September election will probably be left sorely disappointed. 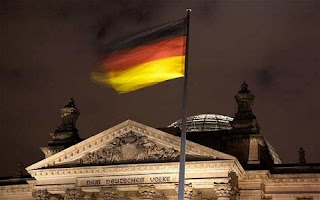 Read the full article below:

“Fuelled by an intensified wider debate about the merits or otherwise of austerity as a remedy to economic problems, the last few weeks have seen politicians, commentators and economists coming out in droves to criticise Germany’s austerity-for-cash approach to the eurozone crisis.

The new Italian Prime Minister Enrico Letta – who is today meeting his German counterpart, Angela Merkel – said yesterday that Italy “will die of fiscal consolidation alone”, leading some to conclude that Italy will lead the revolt against austerity in the Eurozone.

Everyone is now looking ahead to the German election in September, with the idea being that with election season gone and perhaps with a Conservative/Social Democrat “grand coalition” at the helm, Germany will flinch and drop the whole austerity thing.

Unlikely. We might see some easing of targets and toned down rhetoric, but no fundamental shift. The German consensus on austerity runs incredibly deep.

Although, strictly speaking, in Germany, austerity is actually not called austerity at all (it sounds “evil” as Angela Merkel has pointed out). Instead, the term used is sparkurs (savings course) or sparpolitik (savings politics). Or as a verb; Hausaufgaben machen – to do your homework. The opposite is schuldenpolitik (debt politics) or Schulden machen (to make debt).

Such semantics matter. Fundamentally, they illustrate that the perceived dichotomy between ‘austerity’ and ‘growth’ – which strikes a chord with some other electorates in Europe – is a non-starter in Germany. It would be electoral suicide for a German politician to advocate schuldenpolitik – akin to an American Presidential candidate professing himself an atheist or a Swedish politician denying climate change (the latter would most likely also involve being stripped of one’s Swedish passport). This logic drives politicians’ approach both at home and abroad.

By and large the main opposition party, the centre-left SPD, does not advocate a radical departure from Merkel’s blueprint. Instead, it merely nit-picks at the edges while garnishing the whole exercise with concerned rhetoric about the social consequences. A typical SPD critique is that expressed by Nils Schmidt, the leader of the Party in Baden-Württemberg: “We have to make cuts, but step-by-step, we can’t make them all at once.” The key there is “we have to make cuts”. And remember, in an effort to be seen as tough on irresponsible banks it was the SPD that was the most hawkish over Cyprus. Even the Green party is keen to be seen as fiscally responsible taking a tough line on paying down public debt.

German opinion polls have also consistently backed the austerity-for-cash approach abroad with a recent opinion poll showing that 65 per cent said they agreed with Merkel’s handling of the crisis – up from 46 per cent in July 2011.

In other words, even under a grand coalition between Merkel’s CDU/CSU and SPD, the basic course in Germany’s Europe policy will remain fairly steady. Crucially, the complicated sequencing for any further eurozone integration – such a resolution fund for banks or public debt pooling – will likely stay broadly the same: constitutionally-anchored eurozone-wide supervision first, cash later. This also means that Franco-German axis will continue to suffer from tensions.

There is, of course, an intense debate going on within Germany over the country’s position in Europe – and a worry about being seen as the neighbourhood bully. As I’ve argued previously, the crisis sees Germany’s two post-war pillars clashing head-on – firm commitments to both Europe and sound money.

Exactly how this debate will play out remains unclear. However, anyone – say a French socialist – who prays for Germany to U-turn on its eurozone policy after the September election will probably be left sorely disappointed.”