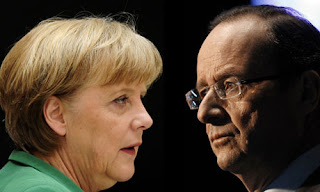 French President François Hollande’s Socialist Party will hold its ‘Convention on Europe’ in Paris on 16 June. Several working papers are currently being prepared as a basis for discussion among party members and supporters at the Convention. One of them has been leaked to Le Monde. And believe us, it contains some pretty strong stuff.

Two caveats before we start:

Nevertheless, it does give a sense of the mood within the party. These are arguably the most ‘explosive’ excerpts:

“The communitarian project is today wounded by an alliance of circumstance between the Thatcherite rhetoric of the British Prime Minister – who only conceives a devalued à la carte Europe – and the selfish intransigence of Chancellor Merkel – who cares about nothing but the savings of depositors across the Rhine, Berlin’s trade balance and her electoral future. In this context, France has today the only genuinely European government among the EU’s big member states.”

The document concludes the party should stand behind President Hollande and support him “in his arm wrestling against the austerity Chancellor [yes, it’s Angela again] and the European Conservatives.”

It’s hard to imagine the French government or Hollande himself publicly endorsing this document, but the sense of frustration is palpable and points to the widely recognised relative decline of French influence over both the direction of the ‘Franco-German motor’ and the EU more widely. It signals the mood within Hollande’s party is becoming increasing hostile to Mrs Merkel, and that the party wants the President to be tougher in confronting the German Chancellor. Not a call Hollande can keep ignoring forever. But also a fight, deep down, he knows he is probably not going to win.