Is the UK winning the argument on EU regulation? 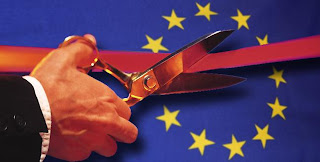 Yesterday afternoon Open Europe hosted Business and Energy Minister, Michael Fallon MP, the man responsible for pushing the UK’s ‘smarter regulation’ agenda in Brussels. This is a subject close to Open Europe’s heart as we have produced a number of highly detailed reports on the cost of EU regulation – £124bn gross between 1998 and 2010.

In his speech, Fallon argued that while the single market had the potential to be the “greatest platform for economic growth”, overly burdensome regulation coming from the EU was choking off potential jobs, growth and competitiveness, and as argued by David Cameron in his EU speech, Europe could not afford this in the global context. “The burden of unnecessary costs” was carried more heavily by Europe than by its competitors, he said.

He argued that this burden falls particularly hard on SMEs, citing a consultation which found that many had to employ a dedicated member of staff simply to process the workload stemming from the EU’s REACH (Registration, Evaluation, Authorisation and Restriction of Chemical substances) Directive. Other areas of EU legislation identified as particularly onerous were the Working Time Directive, the Agency Worker’s Directive and other social and environmental rules.

During the Q&A session he pointed out that leaving the EU was not a panacea – as UK companies exporting to the EU would still have to comply with many of these regulations without having any say over them, something currently vexing the Norwegians (see here for a more detailed look at this issue).

Fallon argued that progress had already been made on over-regulation on both the UK and EU fronts, pointing to strong support from other member states including Germany, which resulted in the recent letter signed by twelve member states calling for a reduction in the overall EU regulatory burden. Fallon pointed out that as a result of the crisis, many member states had become a lot more receptive to UK-style reforms, with France and Poland adopting a ‘one in, one out’ approach to regulation based on the UK model. He was also hopeful that Mediterranean countries would become allies in this fight given their need to restructure their economies and said he was disappointed they had not done so already.

On the UK front, Fallon claimed that the coalition’s six-point transposition plan for EU laws had resulted in the elimination of costs associated with gold-plating, i.e. that when adopting new EU laws, the UK would only impose the minimum standards necessary to comply.

However, as Fallon acknowledged, there is still more to be done, arguing for example that EU impact assessments ought to be independently verified, and that a “cultural shift” needed to take place in Brussels.