Talking about EU military co-operation is always a good way to generate a heated debate, and we expect that the Guardian interview with German Defence Minister Thomas de Maizière will be no exception. Maizière said:

“I am not talking about economic issues or social issues, or whether you drive on the left or the right side of the road, I am talking about security. I am talking about British influence beyond its own borders. I think it is part of the British tradition that Britain has to play a role in the world. Outside the EU it would not lose a role, but it would reduce their own influence and this cannot be in the interests of Great Britain. We in Germany would lose a strong partner for a pro-Atlantic co-operation with America and a pragmatic British way to deal with security issues.”

Now, as we’ve argued in the past, there are a number of drawbacks from the UK leaving the EU – which eurosceptics of that inclination have failed to properly address – including guaranteed market access, voting rights on laws that govern that market access, “pass-porting” for financial services, extra costs at the border for exporting business (rules of origin) and loss of veto to prevent the EU from doing stupid things. Here, German politicians make good points when they talk about the UK’s future position in the EU.

However, the one area that would be largely unaffected – or even completely unaffected – by a possible UK withdrawal from the EU is defence and Britain’s military position.The reason is simple: hard power in Europe is simply guided by logic and incentives untouched by the EU institutions. It’s a separate dialogue completely.

In other words, Britain would be an absolutely key part of “security Europe” even if it left the EU tomorrow. It wouldn’t enjoy either substantial benefits or drawbacks with regards to military cooperation – the EU would be largely irrelevant. Even in the broader field of “foreign policy”, the UK would be a key partner.

The UK remains one of Europe’s 2 1/2 military powers, being the biggest single spender on defence in Europe – spending as much as Italy, Spain, Netherlands and Poland combined. 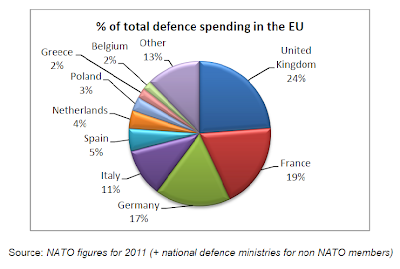 Britain would still have its permanent place on the UN’s Security Council and its nuclear deterrent. Meanwhile it is telling that France and the UK have chosen to deepen their defence co-operation outside of the EU. When it comes to hard power the EU institutions become invisible; think the Balkans, and more recently Iraq, Libya, Syria and Mali.

The UK may benefit from EU membership in the broad area of foreign policy (for example the recent EU-brokered peace deal between Serbia and Kosovo) but if the UK left the EU tomorrow, it would have no impact on its security capabilities.

Conversely, EU partners may find it easier to press ahead with a “European Army” (though not really given political realities). It might be European, but it sure as hell won’t be much of an army.