And Italy’s new President is…the old one! What happens next? 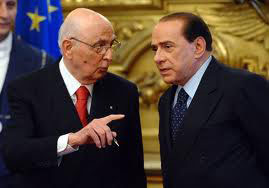 It took the Italian parliament almost three days and six ballots to elect a new President of the Republic. Well, newish. Incumbent Giorgio Napolitano, who will turn 88 in June, eventually caved in to pressure and agreed to serve a second term. This is unprecedented in Italian history and shows how deep the country’s political crisis is. Unable to overcome the stalemate and agree on a new President, the main parties have turned to the old one and begged him to stay.

The good news is that, following Napolitano’s re-election, Italy looks set to have a new government in place sooner rather than later. The big news is the new government would undoubtedly include Silvio Berlusconi’s party.

Whether you like him or not, Berlusconi’s handling of the presidential election was masterful. He avoided ‘hostile’ candidates being elected (think of former European Commission President Romano Prodi or left-wing Law Professor Stefano Rodotà, Beppe Grillo’s man). Any new government will be dependent on his party’s support – exactly what Il Cavaliere wanted since the beginning. The centre-left is in disarray, and his centre-right alliance is now ahead in all opinion polls. No surprise Silvio was so radiant when Napolitano’s re-election became official on Saturday evening.

Beppe Grillo also comes out as a winner, although his victory is likely to become more obvious in the longer term. The Five-Star Movement’s presidency candidate Rodotà was a high profile one. Yet, Rodotà was ignored by Bersani’s Democratic Party – which never really considered backing him without giving any plausible explanation for doing so. Ideal conditions for Grillo to claim “a clever institutional little coup” was materialising. We would expect a surge in popular support for the Five-Star Movement in the next few weeks.

With a couple of poor strategic decisions, Bersani has pushed his party to the edge of a break-up and lost his left-wing ally SEL. After kissing goodbye what could be his once in a lifetime opportunity to become Italian Prime Minister, he also had to step down as party leader. And his party looks set to be in government with Berlusconi again – an option Bersani firmly opposed. Bersani burst into tears the moment Napolitano was re-elected. Some of that may just be relief at his ordeal being over.

So this is where we are at, but things are moving quickly. Keep following us on Twitter @OpenEurope or @LondonerVince for real time updates from Italy.